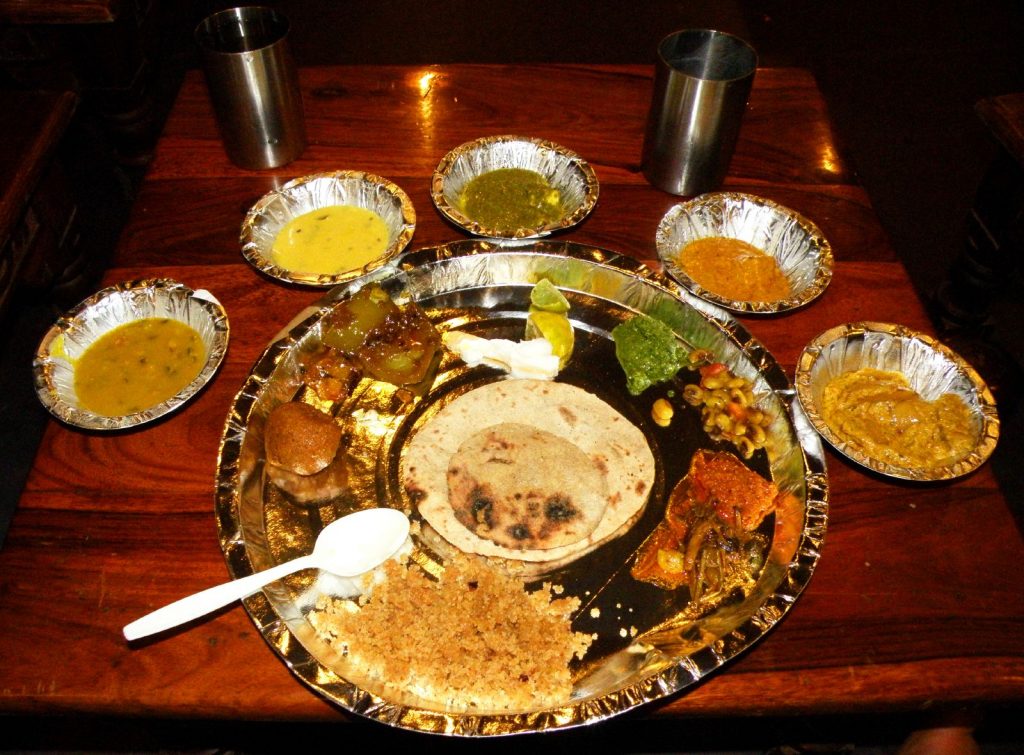 Rajasthani fare found in North India has its own special unique qualities that make it stand out from normal Indian food styles. The fare is reminiscent of the bold and hearty lifestyle of Rajasthan. The history of Rajasthan is a colourful history of wars and fascinating royal stories made inevitable by the fearsome Moghul warriors. Rajasthani food symbolizes its culture, environment, and people from the very hot and spicy to the cooling lassis.

Rajasthani cuisine is a consolidation of textures and colours with every mouthful revealing the different delightful depths and layers of exotic spices intermixed with delicious dairy products, fruits, and vegetables. The Rajasthanis have a strong emotional connection with spices evident from the liberal use of spices in almost every mouth-watering dish. A little bit of cardamom, cinnamon and hey presto! A beautiful dish is presented. Although the thought of spices can be daunting for those who are not familiar to the piquant smell and taste of spices, the intermixing and balance of tastes has been considered to avoid being too spicy but yet incredibly tasty.

For starters, normally a crisp masala papad and a mutton starter called dunali seekh is served. The papad, generally found plain in other states is different here. The difference? A little bit of spice is added to give that extra oomph when biting into the crisp. The various chutneys based on condiments such as mint, tamarind, tomatoes, and chili are served as an accompanying dip. The chutneys are not spicy although it can be moderately hot for those not used to spicy food.
The dunali seekh consists of a chicken or mutton based kebab which is served with a chutney and a salad. Beef is very seldom served due to Hindu religious restrictions. The marinade of the kebab consists of yogurt and a variety of spices which makes it soft and tender.

For the main course, rice and bread such as naan or chapati are normally served with meat and vegetable dishes. Chapatis and naan are made out of wheat during the summers and millet during winter time. A mutton dish called the Lal Maans is one of the most popular dishes. The dish is yogurt based but the addition of red Mathania chilies and spices ensures it retains the Rajasthani brand of hot and spicy.

The dish originally used to be made with wild meat such as wild boar and deer which required a heavy dose of chilies and spices to mask the gamey smell and flavour found in wild meat. This was a favourite dish of the royals, as, after hunting trips, the bounty from the hunt was used to make this dish. However, as the Raj royalty no longer exists, the glamour of hunting trips and bringing meat straight from the Rajasthani forest is no longer a reality.

As wild game is not easily available, the alternate popular option which has become a favourite meat is mutton. Even though the preferred meat has changed due to unforeseen circumstances from wild game to mutton, the hot and spicy style of cooking has not seen any changes. After all, why change something that is so good?

As for vegetable dishes, the gulab jamun ki sabji is basically Indian cheese balls soaked in a rich tomato based spicy cashew gravy. It is popular in Jodhpur and best served with steamed rice and bread. The desserts in Rajasthan, such as the Mathura peda, ghevar, and kachori, are not hot but equally tasty. The interesting fact is the dessert items get the same treatment with spices as the other dishes.