Home / RAJASTHAN / Ghogra-Khodaniya have sold Congress to the BJP, should be expelled, says Dungarpur Ex MP

Ghogra-Khodaniya have sold Congress to the BJP, should be expelled, says Dungarpur Ex MP 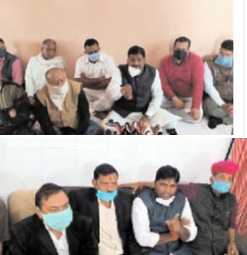 “Congress party is like a mother to us and these men have abused her by selling it to the hands of those people who killed Mahatma Gandhi” Bhagora said in a press conference on Saturday. He said since decades, Congress and BJP had been always  poles opposite to each other in ideologies and practices. While the Congress has always strived to uplift the down trodden classes and had a secular approach towards all sections of the society, on the other hand BJP has forced the youth to become jobless and the poor people even poorer through its policies.

“While BJP always been lays allegations on the state government. Khodaniya and Ghogra connived with the local saffron party leaders and entered into horse trading for electing their candidates in the Zila Parishad” Bhagora said. The Ex MP also said the Khodaniya’s activities have always been objectionable as he attempted to create factions in the tribal communities here.

He also said the the Congress leaders didnot seek advice or permission from any of the senior leaders or the party heads before entering into such an alliance which is condemned. The act has infuriated hundreds of party workers and loyals who have always adhered to the Congress party ideology and therefore both of the men should be expelled immediately.