Udaipur : The Sajjangarh wild life sanctuary is facing a threat from the nasty Lantana bush,  an invasive toxic species which is spreading rapidly here. The weed has spread over an area of around 200 hectares in the sanctuary which sprawls in an area of 519.61 hectares. To arrest its growth, which is feared to be very fast after receiving favorable conditions like rains, the forest department has embarked on a drive to remove the bushes before formation and shedding of seeds. 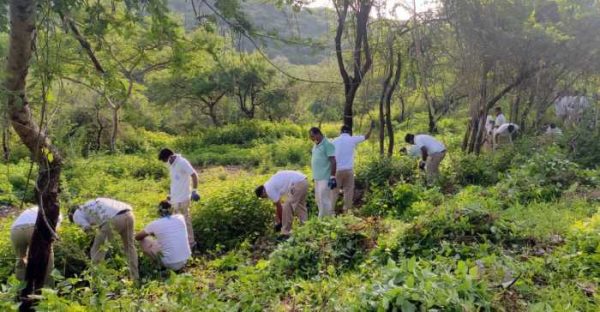 The foliage and ripe berries of the lantana plant contain toxic substances which affect cattle , sheep, horses, dogs, guinea pigs and rabbits. Lantana spreads so fast and does not allow anything else to grow including grass and other plant or shrub which results in fodder scarce and migration or decline of herbivores.This can lead to starvation of leopards and other carnivores at the top of the food chain. On Saturday, under the supervision of CCF R.K.Singh and Udaipur range IG,police Binita Thakur, forest and police officials held a shramdaan program and cleared a vast land covered by the toxic flowery shrub. The program will continue till the first fortnight of August. We are appealing to the public too, to come forward as volunteers to help our team in clearing  the bushes” the officer said.