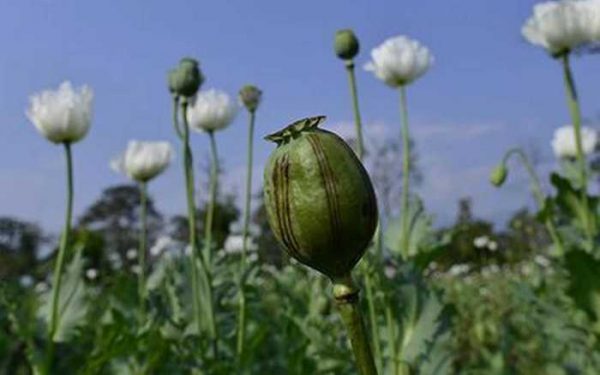 Udaipur : In a bizarre incident reported from Chittorgarh’s Nimbahera block, a woman who had never applied for opium cultivation license (patta) , was sanctioned one, surprisingly that too after her death and the license was transferred to a third party who cultivated the crop and even was benefitted of the payment from the government. The scam was exposed after the deceased woman’s daughter gave a written complaint to the police.

Role of the officials of the Central Bureau of Narcotics (CBN) is not beyond suspicion since the district opium officer is responsible for issuing licenses. Meanwhile Sadar police station has registered an FIR on the complaint and an investigation is underway under sections of forgery charges while the complainant demands the case to be taken under the provisions of the NDPS Act which contains severe punishment for contravention. On the other hand narcotics officials deny any foul in the episode. District Opium Officer (IIIrd Division) A.P Choudhary said procedures are carried on as per the norms and no fake patta has been issued by the office and if there is any such complaint, it would be investigated.

The complainant Nani Bai held in her prayer that her father Asaram son of Partha Dhakad was granted the opium license for 1998-1999 crop year and he was found eligible for cultivation in the successive year too , however, Asaram refused to cultivate the crop. In 2018 under the new opium policy, Asaram’s patta was transferred to his wife Bhani Bai. When the patta was issued, Bhani Bai was not alive and the complainant even claimed that her mother never went to the Narcotics office to apply for the license.

“My mother never tried to get my father’s afeem patta transferred on her name. Perhaps her documents were misused and now it is known that the patta has been transferred to one KamlaDevi who we do not know” Nani Bai said. The patta is valid for opium cultivation in the revenue village of Kochva in Kanera. “The beneficiary cultivated the crop, tendered it to the weighment center and even took the payment from the department which is shocking” Nani Bai said.

She further said, that the officials of the narcotics department furnished false information on her RTI application claiming that no patta was issued to her father . But when she went to the appellate authority, the truth was exposed. It may be noted that licences for licit opium cultivation are issued as per conditions notified by the Central Government. The licence for opium poppy is granted by the District Opium Officer. A cultivator wise Joint Licence for the village is also issued to him.The documents has to be verified and attested by the Sarpanch.

“Prima facie the documents prove the patta was issued after the woman died. As per rules Bhani bai was eligible to get her husband’s licence after his death but it needs to be ascertained whether she had applied for it or someone else did wrongfully.  When the complainant Nani Bai went to the office to apply for her father’s patta,she came to know that someone was using the patta on her mother’s name. A thorough investigation would reveal whether the narcotics officials are involved in any criminal conspiracy or it was unintentionally done”  Deepak Bhargava, SP Chittorgarh said.