Payal Prajapat – the girl who is breaking stereotypes! 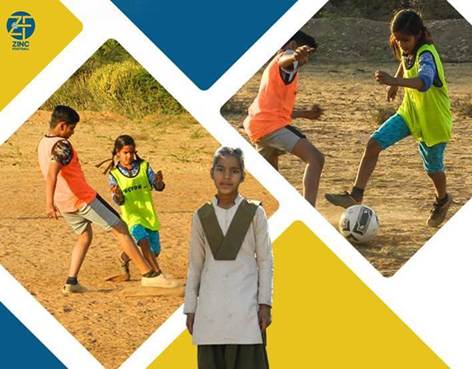 Meet Payal Prajapat—the 12-year-old girl who is blazing a trail and going toe to toe with the boys on the football pitch.

Payal is one of the trainees at a Zinc Football School in Dariba Epicentre and the only girl in the team. It speaks volumes about her grit and determination that despite having to practice with the boys, she is a fierce competitor who is always giving her opponents a hard time on the field.

A powerhouse of footballing talent, Payal, who is a student of Class 7 at the Government Upper Primary School in Sindesar Khurd, is already impressing coaches and observers with her skills. Ask her how it feels to be the only girl in the team and she giggles and attributes it to luck!

In 2017, Hindustan Zinc’s decision to open a football school in her neighbourhood came as a godsend to Payal who saw it as an opportunity to indulge in her favourite sport. She realized that enlisting a few other girls would make it easier for her to convince her parents to allow her to play. She even managed to bring around 3-4 friends but they eventually stopped coming owing to a variety of reasons – from helping their mothers in the kitchen, to assisting their fathers in the fields. Given the predominance of traditional values in this part of Rajasthan, many parents also felt that football was not suitable for girls and discouraged their daughters from playing.

But none of these prevented Payal from pursuing her passion and today she is counted among the best—if not the best—player on the Sindesar Khurd football team. Even as her friends are engaged in household chores, Payal is busy giving shape to her dreams.

Jamuna Lal, Payal’s PT teacher at school who has been tracking Payal’s development, says: “Payal is always enthusiastic about going to the ground, even in this scorching heat. The Zinc Football initiative has opened a whole new world for her and I am certain she will bring glory to everyone.”

Payal’s father, Puranmal Prajapat, who is a driver in HZL, is pleased about his daughter breaking social stereotypes and is a pillar of support for her dreams. “Payal always attends school till 4 pm, and then runs to the playground, and at around 7 in the evening she returns home smiling with tales of the game from the ground,” he gleefully quips.