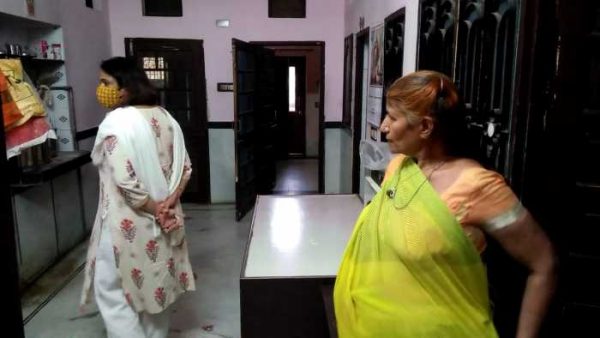 Udaipur : A team from the District Legal Services Authority held a raid recently in an old age home operated by an NGO by the name of Lathi Trust inthe Sarvaritu Vilas area. During the inspection, the officials were shocked to see the pathetic conditions in which the senior citizens had been living. Riddhima Sharma, the additional district and session judge and secretary DLSA,was found that senior citizens were confined to a common room and kept in unhygienic and pitiful conditions.

They didnt have beds to sleep and the runner of the old age home kept a foreign breed dog inside the home to keep a watch that no old person ever used the beds inside one of the rooms. “The trust running the old age home has been violating all  the norms to run such an institution.There was no caretaker, no cook or no cleaner to do the work here and the senior citizens were being made to do all the work themselves despite poor health and ailments” Riddhima told Udaipur Kiran.

During the inspection at the old age home, it was found that there were no seperate living space for man and women. They slept on the floor in a common hall. The room was in a miserable condition, lacking basic hygiene and sanitation. Since elderly people would defecate on the beds hence there were warning boards written all over the area prohibiting . There were no caretaker as well and the old residents were made to clean the premises themselves.

In times of Covid-19 when social distancing and sanitation is extremely important, it was observed that it was almost impossible to follow the same in the small premises of the old age home. They were not given masks or sanitisers. ” In one of a room an 80 year old woman was found in a semi naked condition. She was wailing out of extreme spinal pain but the home did not arrange any medical treatment for her” Sharma informed.

The officer ordered the old woman to be admitted in a hospital later. The team also found that the old citizens were forced to make soap powder, acid and  were not paid for the work. Every inmate was made to sign an agreement at the time of admission wherein it would be mentioned that the home would  not provide for their medical care.