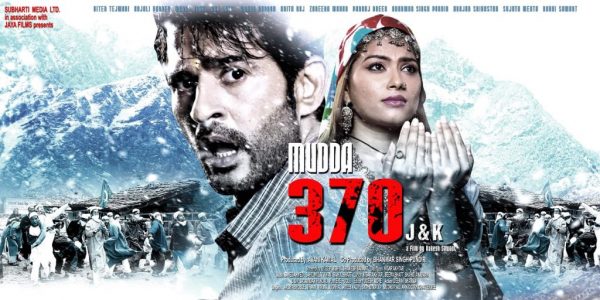 Article 370 is one of the most sensitive and responsible topic to be discussed through a medium of cinema, but so was the topic of Surgical Strike. And we have all witnessed the stupendous success of Vicky Kaushal starrer film ‘Uri : The Surgical Strike’. Similarly ‘Mudda 370 J&K’ touches the very sensitive issue of Article 370  where the director’s genuine effort to present this issue in a very relevant manner is seen.

When a movie starts with a real encounter between a terrorist and an Indian army, you know it’s going to be a nail biting drama. Filmmaker Rakesh Sawant directorial ‘Mudda 370 J&K’ – chronicles the events which led to the birth of Article 370 in Jammu and Kashmir and its adverse effects on people’s lives.

The film chronicles the social and emotional upheaval when a young couple ,  A Kashmiri Pandit and Kashmiri Muslim girl falls in love and it’s rippling and crippling effect on people with malice motives.

The movie explores the issues of communal disharmony, lack of freedom, confines of narrow minded people and utter irresponsible behaviour of authority in the region.

Filmmaker Rakesh Sawant has done a tremendous job with treating the subject with sheer honesty and sensitivity. The film doesn’t try to hide any facet of social disharmony and also addresses the root-cause of civil unrest in Jammu and Kashmir.

Lead actor Hiten Tejwani has done a remarkable job playing this multi-layered character, who eventually pays a heavy price for being in love.

Despite being a well scripted film, the screen play flatters and falls apart at certain crucial points in the film. The ensemble is huge so back-stories of each individual character are hard to remember and follow.

The music and background score are disappointing. Only one song is remember-able, which is by Asha Bhosle, the song features Rakhi Sawant, which is refreshing to watch but seems a little out of place.

The film is produced by Avani Kamal, Dr Atul Krishna and Bhanwar Singh Pundeer under Subharti Media Ltd. in collaboration with Jayas Films.