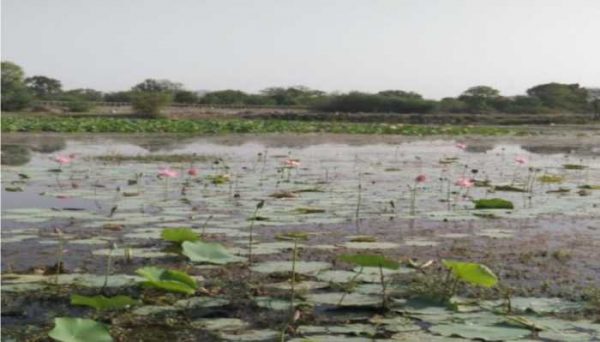 Udaipur : While Ichthyologists all over the world condemn Grass carps as ‘eating machines’ that gulp down complete aquatic vegetation from any water body, limnologists in Udaipur suggest urgent release of some 65 to 70 thousand of grass carp fingerlings as a part of scientific management of Lake Pichhola to improve its water quality and increase fish production here. A latest research done at College of Fisheries of Maharan Pratap University for Agriculture and Technology, finds a vast area of lake spread in 77.50 hectare infested with obnoxious weeds and thick vegetation thus deteriorating the water quality, fostering habitat reduction and reducing number of harvestable fish.

The study was carried out by research scholar Amrita Pritam Shivanil to assess the fishery potential of the lake and to establish its relationship with water quality, plankton and macrophyte productivity. The study was purposely selected as Pichhola is facing anthropogenic pressure due to heavy human populations and hotels around it. This has created threat to shift its trophic level and alteration in its important physico-chemical parameters.

“We divided the lake into different stations i.e the surface, subsurface and bottom water of the lake. The lake is moderately shallow with an average depth of 4.5 meters including weed choked littoral zone of 7 7.50 hectares out of total 696 hectares water spread area. Station A was shallow and isolated site. B was surrounded by maximum human habitation with relatively deeper water, station C was also surrounded by human habitation and having large littoral zone, whereas station D was at the tail end with considerably large littoral zone” main advisor and Dean Fisheries college Subodh Sharma told Udaipur Kiran.

“The average water quality parameters of Pichhola indicate that the lake has relatively moderate level of nutrients with addition urban wastes at certain sites, thus coming under a category of “mild eutrophic to eutrophic water, 35 genera of phytoplankton, 31 genera of zooplankton population were recorded here ” Amrita said. Highest organic pollution was recorded at station B and C posing threat of eutrophication with solid and liquid waste disposal.

The study indicated the lake has medium species diversity and high planktonic diversity. Total 22 species of aquatic macrophytes were found in lake Pichhola. Ten species of benthos were observed here which were represented by 7 families. During the study 33 fish species were also observed in the catch in Pichhola, The fish catch at the lake is categorized into four groups viz., Major carps, Minor carps, Cat fishes and others or miscellaneous group.The potential fish production is 140,473.96 kg per annum presently, however, the production may be increased up to 2,33,830.46 kg/annum through scientific management of the lake, the research claims.