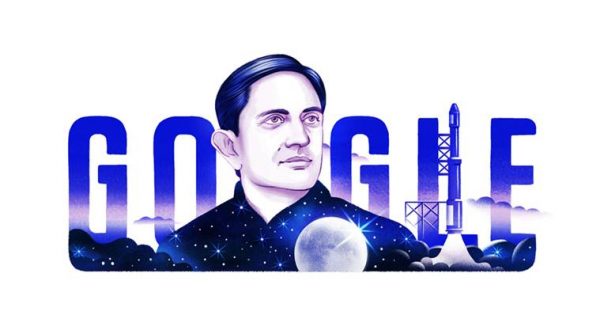 New Delhi : Google has dedicated its doodle on Dr. Vikram Sarabhai, father of nation’s space programme, on his 100th birth anniversary today. Chandrayaan-2 is soon going to drop a lander named Vikram on the earth’s sole satellite on 7th September. Indian Space Research Organisation (ISRO) has also announced an award in his name on his birth centenary.

It was Dr. Vikram Sarabhai who held successful dialogues with Indian government explaining importance of space programme as a developing nation. He clearly stated that in the community of nations, India should be second to none in application of advanced technologies to the real problems of man and society. After gaining education of natural sciences from Cambridge University and returning, with support of Dr. Homi Bhabha, father of India’s nuclear science programme, he established rocket launching station in Thumba near equator and the first flight was launched on November 21, 1963. Due to his initiative, the first Indian Satellite was fabricated and put into orbit in the year 1975 from Russian Cosmodrome.

Dr. Vikram Sarabhai played important role in establishment of Indian Space Research Organisation. Besides this, he also supported in establishing physical research laboratory, community science centre and Indian Institute of Management in Ahmedabad. He also chaired Atomic Energy Commission. He was awarded Padma Bhushan in 1966 and Padma Vibhushan (posthumously) in 1972.