Udaipur : Despite a clear cut ban by the National Green Tribunal, on burning of waste in open places across the country, Dungarpur municipal council on Friday, burnt an effigy of Ravana which was made of waste, plastic bottles, polythene bags and similar material. The initiative was meant to spread a message to the public on Swachhta and hygiene and against use of plastic bags and to inform them of the hazards, however, activists severely condemned the initiative and cried environment pollution due to the act.

Environmentalist claimed that Dungarpur municipal body which had been among the pioneers and leader in the Swacchta Abhiyan has acted unwisely and should be penalized for giving a wrong message in public. Common people who may not know the hazards of burning plastics will take it to be a right manner to dispose waste and many people would do the same which will pose serious ecological threats and air pollution in the city, activists claimed.

Meanwhile, while asked for a clarification KK Gupta, chairman of the Council told Udaipur Kiran ” it was not plastic Ravana, it was ‘ Gandagi ka Ravan’ and comprised of all kind of garbage. We didn’t burn plastic, the plastic bottles placed were removed before the effigy was put on flames”. Dungarpur Collector Rajendra Kumar Bhatt said ” Though I was not present in the function, but I am told that an effigy made of waste was burned to sensitize and appreciate people’s contribution in making Dungarpur one of the cleanest city in the state. The plastic content was removed before it was consigned to flames”.

The move by the municipal council came as a shock to the learned mass as Gupta is also the brand ambassador of Swachhta Abhiyan in Rajasthan and his efforts in making Dungarpur a clean and plastic free city had been much appreciated in the recent past.

” Burning plastics at public places is not only illegal but it it very dangerous for human beings. It triggers health problems, increases risks of heart attack, aggravates respirator ailments like asthma etc, damages the nervous system, it is dangerous to liver and kidney etc” Retired Prof and activist Mahesh Sharma claimed. Dangerous gases like carbon dioxide, carbon monoxide and chemical like dioxin are released due to plastic burning which is most dangerous for living organisms, it may even lead to cancer, experts said.

As per the legal provisions by the NGT, for each such incident where waste is burned publicly, violators including project proponent, concessionaire, any person or body responsible for such burning, shall be liable to pay environmental compensation of Rs 5,000 in case of simple burning, while Rs 25,000 in case of bulk waste burning. 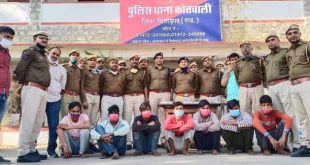