Home / SPORTS / Three Cheers for Ladu – the wonderkid from Dariba

Three Cheers for Ladu – the wonderkid from Dariba 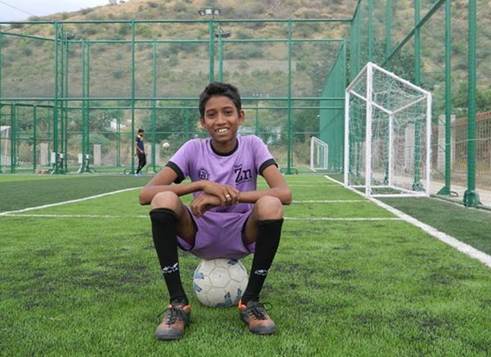 How often do we see a father’s death turning out to be a motivational factor for a young kid! Well, 14-year-old Ladu Lal Jatiya from Naya Dariba has promised himself ever since to live his father’s dream of becoming a footballer.

It took Ladu and his mother (Tipu Bai) several months to begin the process of resetting their lives – they had lost not only a loving husband/father, but also the sole bread-winner of the family. Tipu Bai had no option left except to turn to their farm fields to support Ladu and his three younger sisters.

When Ladu’s father was alive, he would often take Ladu to their neighbour’s home to watch a football match. More than the game, young Ladu was always amazed to see people in that room, passionately and loudly cheering for their teams. Once his father passed away, football became Ladu’s way of remembering his father.

Ladu now wakes up every morning and rides the 6 km from his home on his bicycle to reach the Zinc Football Community Coaching Centre in Dariba, an initiative by Hindustan Zinc. A regular in his training sessions, football is the new constant in Ladu’s life. And Ladu’s coach is very certain that Ladu’s hard work and dedication will certainly one day bring loud cheers for Ladu …