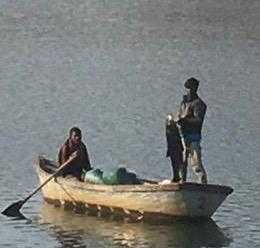 Udaipur : Environmentalists and activists have condemned the act of the Fisheries department to award fishing license at Badi lake. Badi Lake is the home of  the endangered ‘Mahaseer’ fish also known as the ‘Tiger of rivers’ , for its size which inhabits only in pollution free waters. There was,once,  abundance of Mahaseer in reservoirs connected with Chambal and Mahi river system. In southern Rajasthan, waters connected with Bedach river basin had abundance of Mahseer some three-four decades ago, but now, there is little trace of them. In Udaipur, Mahaseer is found in plenty in Badi Lake although they do not breed here. Interestingly, the female Mahaseer is known to swim against the flow for several kilometers upper reaches of small streams to spawn and its eggs hatch naturally while floating.

A double bench of the High Court, Jodhpur, while hearing on a civil writ petition related to pollution of lakes,  had in May 2017, directed the state government to take all necessary steps for conservation of fish Mahaseer in the lakes of Udaipur and all other places where it is available. Since then, fishing activities was banned here.

The court had asked Udaipur Collector to ensure that no activity that may cause harm to the existence of Mahseer takes place in the Badi Lake and also said that he would ensure conservation and protection of the fish specie and take advice from the CCF.  But recently on January 5, the fisheries department awarded licenses to contractors for fishing in water bodies in five districts including Udaipur’s Badi lake, Dungarpur’s Punjpur, Modiya Mahadev in Chittorgarh, Gudolav in Ajmer and Beethan in Jalore.The fishing contract at Badi Lake has been awarded to the highest bidder, a contractor Ajay Yadav from UttarPradesh, at a price of 12 Lakh 12 thousand rupees.

“The tender has been granted for three months viz. January 6 to March 31 and the full fledged fishing activities have begun in the lake. While there is a national program for conservation of the Mahseer, it is unfortunate that fishing would become a major threat to the endangered species which is found only in Udaipur presently, in the entire state” Rahul Bhatnagar, ex-chief conservator of forest Udaipur told TOI. Meanwhile, the Forest department officials have decided to raise their objection to the tender.

“We came to know about the tender and fishing activity having resumed at Badi. We will soon be writing to the Collector to take steps for cancellation of the fishing tender for Badi Lake as it is also a violation of the court’s direction” RK Kherwa, CCF (WildLife) Udaipur told Udaipur Kiran.