Dhaka : Bangladesh police have stopped 43 Rohingya refugees from being smuggled to Malaysia by boat with a dozen women claiming they were abducted by traffickers, officials said Thursday.

Acting on tip-offs, police found the refugees at two separate places in the southeastern border district of Cox’s Bazar, raising the number of Rohingya being rescued from the traffickers to more than 100 in less than a week.

About 740,000 of the Muslim minority fled Myanmar for Bangladesh after a military clampdown in the Buddhist-majority nation in August 2017.

They have joined another 300,000 Rohingya who have already been living in overcrowded camps in Cox’s Bazar following previous bouts of violence.

Officials fear many may end up being exploited by an internationally organised human smuggling racket who have previously sent thousands of Rohingya to Malaysia by boats until Bangladesh launched a crackdown in 2015 following the discovery of mass graves of refugees in Thailand.

“The young women from the refugee camps were lured by the traffickers. They were promised they would be sent to Malaysia. They were then brought to Cox’s Bazar and kept in a house,” RAB spokesman Mashkur Rahman told AFP.

Rahman said they were treating it as a case of abduction after the women claimed they were confined in a room without consent.

In another drive late Wednesday, Cox’s Bazar police rescued another 31 Rohingya from the southern island of Maheshkhali, some 110 kilometres (70 miles) away from the overcrowded Kutupalong refugee camp.

Local police chief Provash Chandra said the 14 women, 11 men and six children were hiding in a coastal forest at Maheskhali waiting to board a Malaysian-bound boat.

He said they arrested a woman trafficker and were “searching for others”.

An analyst said the latest discovery of Malaysia-bound Rohingya was a “dangerous” sign and shows the desperation at more than 30 refugee camps where the Rohingya live in bamboo and tarpaulin made shanties in squalid conditions.

“It is very natural for the desperate refugees to attempt the risk to search for a better future,” Tasneem Siddiqui, who heads a Bangladeshi think tank on migration issues, told AFP.

“They know the way is full of obstacles, yet many think this is their only way out,” she said.

Authorities fear that more Rohingya will try to take boats to Malaysia while the Bay of Bengal remains calm before the arrival of monsoons at the end of March. 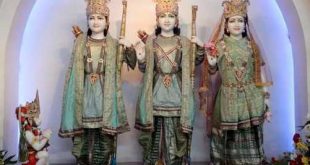