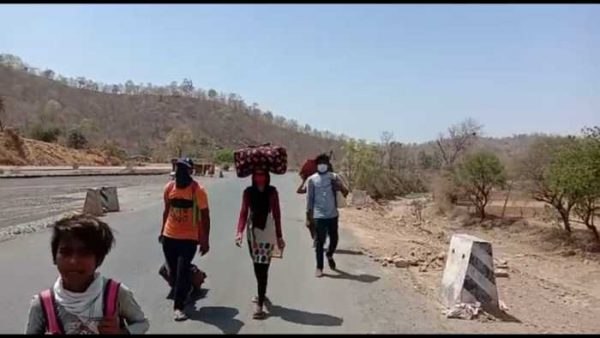 Udaipur : The Dungarpur district administration deployed medical teams on sunday to screen the hundreds of expected migrant workers from Gujarat and Maharashtra cities. Security has been beefed up in the region as an additional company of the Mewar Bhil Corp along with the police team from Bicchiwada station took charge of the area a day ahead of opening the Gujarat border to permit entry of the migrant workers to their home towns. On Sunday, the border was let open for some time as few laborers walked their way to Ratanpur check post.

They were screened thoroughly, later the border was closed which is expected to re-open on monday morning. Collector Kanaram told the media medical teams have been stationed to screen every single person arriving from various cities of Gujarat first and Maharashtra in the second phase. The administration has acquired hotels and buildings in the periphery to accommodate these people who would be stationed here and later on transported to their respective villages by buses arranged by the government. Dungarpur SP Jai Yadav said the police personnel too have been given safety gears, masks and sanitizer to keep themselves safe from the probable threat of getting infected. “They have been clearly briefed about the guidelines issued by the government on the protocol to receive the workers, screen and their safe departure. Their forms would be properly filled so that we can keep a watch on their movements once they reach their homes” Yadav said. Instructions have also been given to ensure smooth and limited intake of workers at a time so that large gatherings do not crowd the checkpost area.

At Pratapgarh the Rajpuriya, Rathana and Kulthana area adjoining MadhyaPradesh are presently completely sealed and there is no possibilities of workers arriving through these routes since a positive case was reported from Nimbahera of nearby Chittorgarh a day back. Police teams are deployed on the highways while the kutcha roads inside the villages leading to the borders have been dug with earth moving machines to prevent sneaking in of vehicles illegally. The border villages connect to Ratlam, Zawra towns of Madhya Pradesh which are totally sealed and public movement is completely restricted presently, though medical teams are stationed here.

PM greets people on the occasion of Milad-un-Nabi