Home / HEADLINES / INDIA / WTO reforms must be taken up by all member countries: Piyush Goyal

WTO reforms must be taken up by all member countries: Piyush Goyal 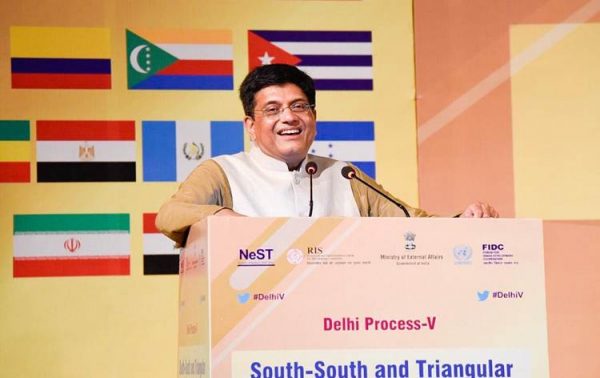 The time has come to take on the policies of protectionism and unilateral measures by some developed countries that are having an adverse effect on global free trade and if this continues there will be recession in the world and no country will escape it, said Union Minister of Commerce & Industry and Railways, Piyush Goyal.

He was speaking at an international dialogue on South-South and Triangular Cooperation today in New Delhi. Commerce and Industry Minister urged that all member countries must take up reforms of the WTO and not deal with issues in a piecemeal manner. We cannot afford to walk away from the current system but all member countries of the WTO must re-engage to ensure that  the rule-based, transparent, and non-discriminatory governance that free-trade requires is taken forward honestly and in a non-discriminatory manner and keeping in mind the interests of different member countries with disparate GDP.

Piyush Goyal further stated that the policies of protectionism being followed by some countries in the developed world are affecting engagement between countries for trade in goods, services and protection of investments.

The aspirations of people cannot be held back for a better life: for sustainable growth of the seven billion people of the world and India is committed to the Sustainable Development Goals (SDGs) and believes that peoples’ aspirations cannot be held back till 2030, said the Commerce and Industry Minister. India is not going to wait till 2030 to give access to energy, literacy and clean potable water to its people, India is fast-tracking its efforts to reach the SDGs to the last man at the bottom of the pyramid. India also desires that this pace of development reaches people in the rest of the world.

South-South cooperation is a broad framework of collaboration among countries of the South in the political, economic, social, cultural, environmental and technical domains. Involving two or more developing countries, it can take place on a bilateral, regional, intraregional, or interregional basis. South-South cooperation is a manifestation of solidarity among peoples and countries of the South and the attainment of the goals of Sustainable Development.

Commerce and Industry Minister hoped that the South-South and Triangular Cooperation will help the developed world become a part of the developing world’s growth agenda.