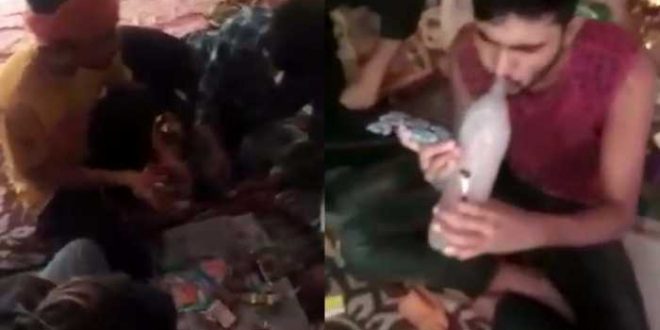 Udaipur : Maladministration in Nimbahera sub jail in Chittorgarh district has been exposed after  some video clips went viral on social media. In these clips some prisoners are seen doing drugs, supplying tobacco and speaking on mobile, things that are completely prohibited inside any prison. The videos that are in circulation are told to be a week old. In one of the video two men are seen assaulting a fellow prisoner allegedly for not heeding to their ‘vasooli’.

According to sources, some of the influential prisoners have connection with a beedi-gutka supplier who provides them tobacco and contraband at exorbitant rates. A pack of beedi costs around 100 ruppes, they claim. Prisoners also pay money to the leader gang for availing facilities not accessible otherwise in the jail.

According to sources, the members of the gang forcibly collect money from others and those who do not abide by their orders are beaten. After one such incident, recently a relative of one of the prisoner even posted a complaint on Raj portal. In another video prisoners are seen indulging in merry making and dance. When asked for a quote jailer Jeetmal Menaria said such things are done by prisoners to pressurize and harass authorities. He said inspections are conducted frequently to check prohibited things are not kept by the jailbirds.