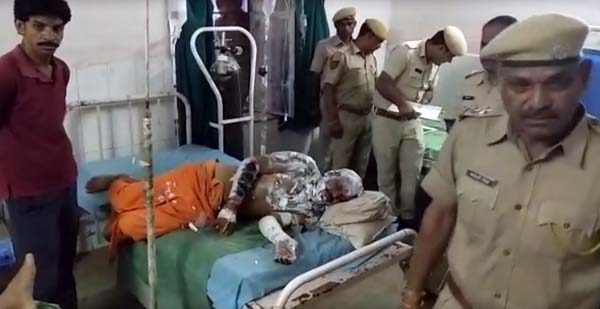 Udaipur : Two unidentified men attacked Sant Ramjivandas and set him ablaze in the wee hours of Friday at Mahu Mahadev temple under Gadariyawas gram panchayat in Dhariyawad block of Pratapgarh district. These men had a day ago, attempted to kill the saint and stabbed him with a knife. The saint who was referred and admitted in Udaipur civil hospital, is better now and out of danger, Pratapgarh SP Anil Beniwal said. A special investigation team, FSL experts and a dog squad visited the crime spot and recreated the scene for detailed investigation. The SP said an enquiry is already underway and the assailants would be nabbed soon.

Mahant Ramjivan Das was going to attend the nature’s call around 3.30 am when two men barged inside the temple and held him. They doused him with kerosene oil kept inside the room and set him on fire. The priest jumped into the temple kund (pond) to save himself while the assailants fled. Dhariyawad SHO DungarSingh with team arrived in being informed. The Mahant was treated at the nearest hospital and later referred to Udaipur. He has sustained severe burn injuries on the upper portion of the body and hands. On Thursday morning too, two men had entered the temple in odd hours and when Ramjivandas questioned them, they asked mobile charger and when he said there was no charger, they tried to stab him.

A police complaint was made by Ramjivan Das against unknown men then too. Legislator Gautamlal Meena had visited to enquire about his well being after the stabbing incident on Thursday. Sant RamjivanDas is said to be quite popular in the area for his simplicity. Large number of devotees who come to the temple situated near a triveni sangam (confluence of 3 rivers) also meet the priest who has vast knowledge on spirituality. The attacks on Mahant thus incited a spur of outrage and locals demanded immediate arrest of the accused.