Treating 11k hectares in Udaipur to create water zone for 24,000 people of 26 vilages 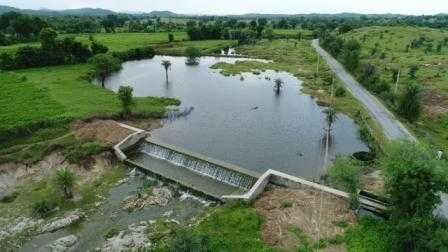 Udaipur : Water scarcity is a big problem, particularly in Rajasthan. It has 13.88% of India’s cultivable area, 5.67% of population and about 11% of country’s livestock. But it has only 1.6% of surface water and 1.70% of ground water. Water conservation projects, small or big, play a significant role to improve social and economic conditions of the rural people in Rajasthan.

One such company that has been silently working to develop ground water and conserve water is the NOIDA based DS Group. Dharampal Satyapal Group (DS Group) initiated a ‘Water Economic Zone’ project in the year 2018 in Udaipur. The project is spread over an area of around 11,385 hectares in Alsigarh and Kurabad, districts of Udaipur and is expected to benefit more than 24.000 rural and tribal people of 26 villages.

Out of 11,385 hectares, 5316 hectares have already been treated and has created 9.64 Lakh cubic meter of water storage and recharge capacity. This has also benefited agriculture production in this area and is providing sufficient drinking water for the cattle.

Overall the group has already created and revived water storage & recharge capacity of around 20,83,855 cubic meter of water annually, which irrigates 617 hectares area and impacting around 33,000 lives in Rajasthan as of now.

According to Central Water Commission’s report, India would reach a population of about 1.66 billion by 2050. The annual food requirement will also exceed 250 million tons. This also means that demand for water will also increase substantially.

According to the Central Water Commission, India needs a maximum of 3,000 billion cubic metres of water a year while it receives 4,000 billion cubic metres of rain. The country captures only 8% of its annual rainfall, which is amongst lowest in the world leading to the scarcity of water. This also means that replenishing ground water and conserving the available water resources seems to be one of the most doable solution.