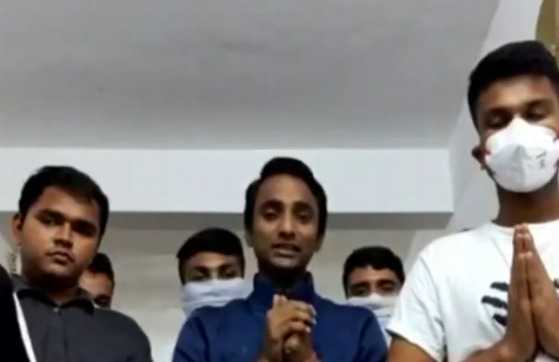 ‘Went for internship in November ‘

Udaipur : Indian youths stranded in Mauritius after suspension of international flights in both the countries due to the novel corona outbreak , have made frantic appeal to the prime minister Narendra Modi for rescue. Kavish Jain, a resident of Udaipur and a second year student of Hotel management studies is one among the group to have made a video of the appeal and make it viral on social media.

Kavish is pursuing Hotel Management from Asia Pacific institute, Ahmadabad and was doing internship in Mauritius. According to him , he is now trying to reach Indian authorities through twitter and other social media platforms  but there is no response yet.

Kavish’s father Sandeep Jain told Udaipur Kiran that his son had a return ticket for 31 March initially but when the international flights were suspended from 22 March onwards, his ticket was preponed for 21st. When Kavish reached the airport, there was some confusion at the last moment between Air India and Air Mauritius which resulted in a problem and Kavish along with hundreds of other Indian youths from various cities , were not allowed to board the flight despite waiting for ten hours in the queue . ” Now, more than 400 students who are pursuing medical and many into hotel management are stuck.

Many of them do not have enough money considering the high cost of living in Mauritius they are left in a peril ” Sandeep said . Kavish who had vacated his accommodation has found a temporary one om share basis with four other youths who too are stranded like him in the island country. Sandeep who is a cloth merchant in Udaipur is reaching out to authorities seeking intervention and get back his son safely back home. Kavish:s college or the agency which facilitated him visa for the internship program too has been of no help,said his father.

Tagged with: Udaipur boy appeals to PM Modi for help