Sports is a powerful medium to bring communities together: Shri Kiren Rijiju 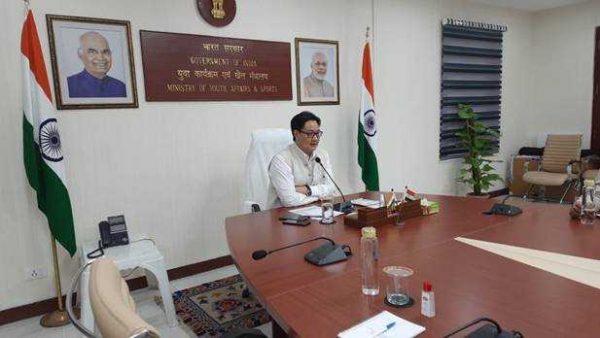 Sports Minister Kiren Rijiju was the chief guest at the inaugural session of the two-day international webinar titled “Physical Education and Sport: The power to unite communities” organised jointly by the National Sports University, Manipur and Sports Authority of India’s Laxmibai National College of Physical Education (LNCPE) in Trivandrum. RC Mishra (IAS Retd.) Vice-Chancellor of the National Sports University and Professor Branislav Antala, Vice President, International Federation of Physical Education (FIEP), Slovakia were also part of the webinar . Over the hour-long webinar, the speakers spoke about the importance of physical education in society and also how sports helps in uniting communities not just within the country but globally as well.

Kiren Rijiju said, “The theme of the webinar is such an important yardstick not just for physical activity but for society. Through sporting success, an area prospers, an entire community achieves much more. In India there is the example of MC Marykom, who is such an inspiration to women, having won eight world championship medals and four times since becoming a mother. She is a big inspiration towards women that you can be successful after motherhood. Globally too we have sportspersons like Pele whose success went beyond Brazil and inspired the whole world. Jesse Owens is a big symbol of empowering an entire community. Sporting achievements show many things beyond sport.”

Rijiju also spoke about the importance of mass participation and the role of Fit India and Khelo India in helping India becoming a sporting powerhouse, “Sport and physical education is the same thing, PM Modi has given impetus to this movement, Khelo India on one side and Fit India on the other. Through Fit India, we want to create awareness that everyone should be fit. Fit India can make India a sporting powerhouse. We must ensure mass participation, once we are united in our objectives there is nothing that can stop India from reaching the top. Given the contribution of India’s population to global numbers, India becoming fit means the world becoming fit. With Khelo India, people from every nook and corner of the country can play.”

RC Mishra said, “The theme of the webinar is relevant in the wake of the government launching their new education policy. PE and Sports has been included as a prominent part of the curriculum where it will be mainstreamed with regular education. Sports will lead to sustainable growth of communities as well as helping people becoming fitter and healthier to avoid risk of diseases. Sport is a sustainable development indicator and promote peace and tolerance. Sport also promotes teamwork, fitness and discipline. World leaders use sport to promote peace and unity.”

Professor Branislav Antala said, “The Government of India has taken some very good initiatives like the online classes that have been conducted by SAI LNCPE since June. The initiative has been supported by 60 academics from around the world. I hope National Sports University will train many more people from India.”