Ministry of Petroleum and Natural Gas & Steel, Dharmendra Pradhan, on his 4-day Russian visit, today had a productive meeting with Mr. Sergey Tyrtsev, first Deputy minister for development of the Russian Far East and Artic. Furthering energy cooperation the Indian and Far East Russia, particularly on sourcing coking coal and other minerals, were discussed in the meeting. 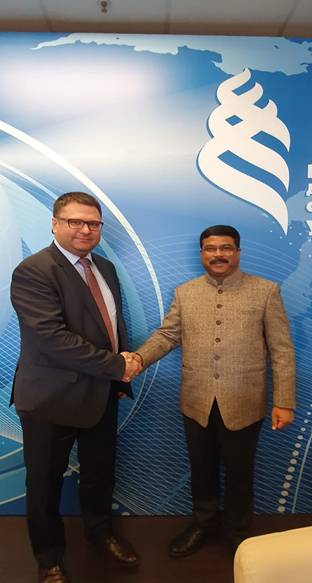 Dharmendra Pradhan also met Vice Chairman of RosGeo, the national geological company, which does Seismic and Geological Study of oil, Gas and other issues. Rosgeo was a part of the efforts to discover the ‘Bombay high’ field of ONGC.  Areas of cooperation in coking coal, oil, gas and rare earth metals, specially Lithium, was discussed during the meeting.

Pradhan interacted with Senior Management of Vostochny inter modal container port. It is one of the oldest and year-round operation port in the Russian Far East, specialized in coal handling and suitable for handling large tonnage ships. The Minister discussed with port authorities about their expansion plans and also on ways to secure more coking coal for the domestic steel industry.

Representatives of Indian Steel and Coal companies held separate meetings with their Russian counterparts. Long-term cooperation with Russian Far East in Coal Sector will help India Biz the demand gap of coking coal in the Country.

The Minister also met Mr. Vadim Mikhailov, Deputy Head of Russian Railways and discussed about the logistical issues in evacuation of coking coal. Mr. Mikhailov informed that Russian railways is completing the necessary infrastructure by 2020 to decongest railway lines and to ensure smooth connectivity between ports and Mining Centre.