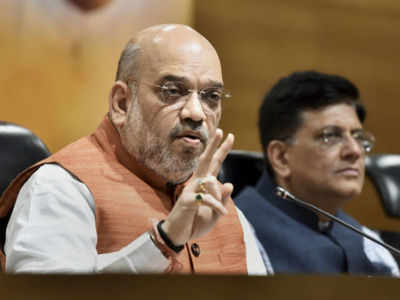 Kolkata : Categorically denying that BJP workers were involved in last night’s vandalism and clashes inside Vidyasagar college campus in North Kolkata during his Road Show, BJP All India President Amit Shat here today demanded a high level probe by an independent agency into the whole incident to reveal the truth behind such unprecedented vandalism and smashing of the statue of the 19th century educationist Ishwar Chandra Vidyasagar.
Describing smashing of the statue of great philosopher of Bengal renaissance in 19th century as very unfortunate and was against the rich culture of Bengal, Shah here today said that when his Road Show was passing through the area, the college gate was locked.
If the gate was closed and locked from inside then how our party supporters could enter the college campus and vandalise the statue, as alleged by the Trinamool Congress and Chief Minister Mamata Banerjee, the party President  questioned and came down heavily on them for levelling a totally false and biased allegation on the party to tarnish its image.
He also presented a number of photographs before the media and claimed further that all these photographs had clearly shown that the college gate was closed and none of the BJP workers went inside. As such the total incident and the vandalism was pre planned and the handiwork of the ruling party workers to tarnish the image of BJP in Bengal, he said  and reiterated his demand for an independent probe into the whole incident.
In this connection he also questioned the role of Kolkata police whom he blamed as a mute spectators during the large part of the violence. He also blamed the state administration for ‘deliberately’ creating hurdles before his Road Show yesterday.
Shah also took a dig at the role of the Election Commission and blamed it for allegedly following a double standard in taking action against the goons of the TMC in Bengal.
Unlike in other states, no miscreants of the ruling party was booked in the state and allowed them a free hand to create trouble before the last phase of elections in nine constituencies in the state on 19 May, Shah said and cited the examples of tearing off BJP flags, festoons and posters by TMC workers even before the start of his Road Show yesterday. The EC failed to take any action despite being informed about it several times, he alleged.
Please share this news
2019-05-15
chundawat
Share