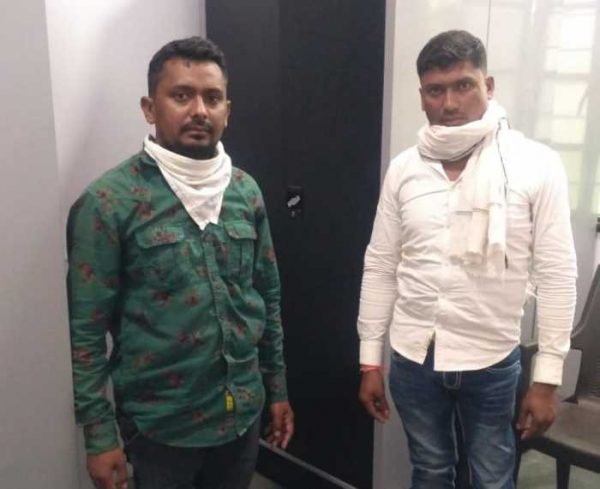 Udaipur : A sarpanch and his brother, a male nurse, both residents of Bari village in Chhoti Sarvan panchayat samiti of Banswara district were arrested by the Anti Corruption Bureau sleuths for taking bribe of 1.11 lakh rupees as token  money from a contractor. The ACB team from Udaipur laid the trap and arrested the Bari village sarpanch Bahadur Maida (33) son of Kesar Singh, red-handed after he received the bribe money from the complainant Rampal Singh outside the Housing Board colony on the Udaipur- Banswara main road on Tuesday morning. The officials later nabbed the sarpanch’s elder brother Mukesh (35) for his alleged involvement in bribery.

” The complainant runs a company by the name of  Geo-Technical Services based at Navi Mumbai who had received a contract worth 3.5 crore rupees for soil investigation before railing erection work at the Banswara Nuclear Power Plant. He had  to complete the work by July, however, his workers were not let to work peacefully at the project site in the village for past 6 months by the Bari village Sarpanch and his brother” circle inspector Harishchandra Singh Chundawat told Udaipur Kiran.

Since the site fell in the panchayat area, both the accused demanded 10 percent of the contract value i.e. 35 lakh rupees approximately as bribe to let them finish the work. When the contractor did not heed to their demand, the accused used their influence to deter the workers from completing the work and even pelted stones at the machines to frighten them away. A complaint against them had been given at the local police station too, but the men did not mend their ways.

Chundawat said that the complainant came from Mumbai recently and met the sarpanch and struck the deal at 8 percent of the contract value. When the complainant told the accused that he could pay the bribe money only after his work begin, the sarpanch demanded a token amount of 1 lakh 11 thousand rupees as assurance. The complaint was verified on July 19 and on tuesday morning when the contractor called the sarpanch, the accused came in a car and received the bribe money which he kept inside a towel. The sarpanch also called his brother to tell he had received the amount and the ACB team later arrested the latter too for involvement in the conspiracy.