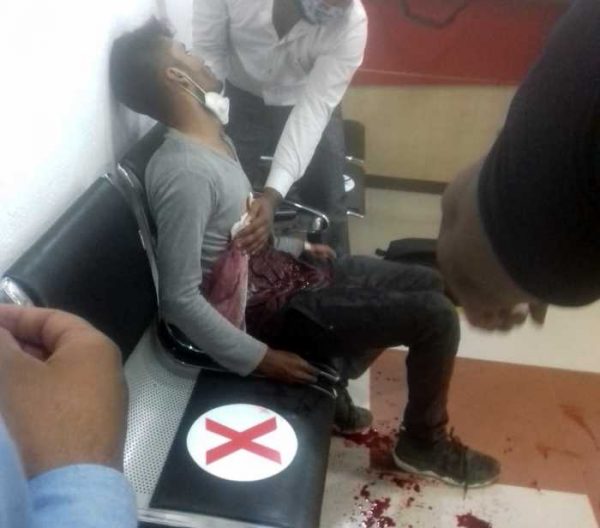 Udaipur :  In a broad daylight incident, an alert salesman foiled loot bid by two miscreants outside the main branch of Axis Bank here on Saheli Marg under the Hathipole police station limits on Monday. One of the men stabbed the salesman who did not let loose grip on the cash bag he was carrying and ran inside the bank to save himself. The criminals fled from the spot immediately.

The incident shocked the customers and staff who did not understand what had happened when the injured man ran inside the bank and ran helter skelter in a panicked condition. He bled profusely and was rushed to the MB hospital, his condition is stable, sources informed.

Amit Sankhla. a resident of Ambamata area works for a finance company and had come to the bank to deposit the daily collection amount. He was carrying approximately 10 lakh rupees and was followed by two men on motorcycle from quite a long distance.

As Amit reached outside the bank and parked his motorcycle, the miscreants stopped near him and tried to snatch the cash bag after stabbing him. Amit ran inside the bank shouting for help meanwhile the robbers fled from the spot. Police arrived and sealed the area. Cops also took CCTV footage from the premises to get details about the criminals. The man succumbed to his injuries late night.