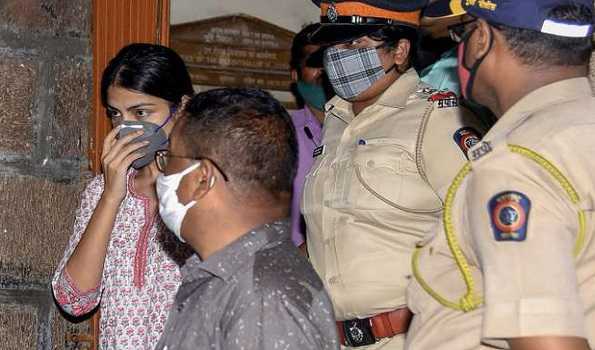 New Delhi : Rhea Chakraborty, prime accused in the drugs angle being probed in Bollywood actor Sushant Singh Rajput death case, was arrested on Tuesday evening by the Narcotics Control Bureau (NCB) under NDPS Act after days of grilling. However, the formal arrest has not been announced yet and the paperwork and other formalities are currently under process.

Rhea Chakraborty was interrogated for five hours today, third day in a row. She was grilled for six hours on Sunday and eight hours on Monday. She will now be taken to a hospital for medical checkup. Security was beefed up outside the NCB office where Rhea was being interrogated. Sources said Rhea had given about 25 names from Bollywood in the drugs angle. However, it could not be immediately confirmed officially.

This brings to ten the total number of arrested made so far in the drugs case. Rhea’s brother Showik and Sushant Singh Rajput’s staff members Samuel Miranda and Dipesh Sawant had been arrested earlier. Rhea had said earlier that she was ready for arrest and she had not done anything wrong. She had not taken anticipatory bail either. Rhea’s lawyer had in a tweet described her interrogation as ‘witch hunt’ and said that if loving someone was a crime, she would face the consequences of her love. ‘Being innocent, she had not approached any court for anticipatory bail.’