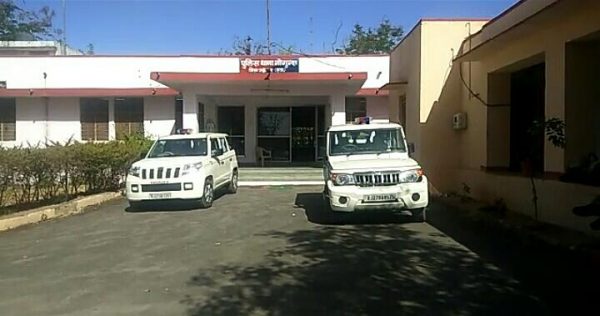 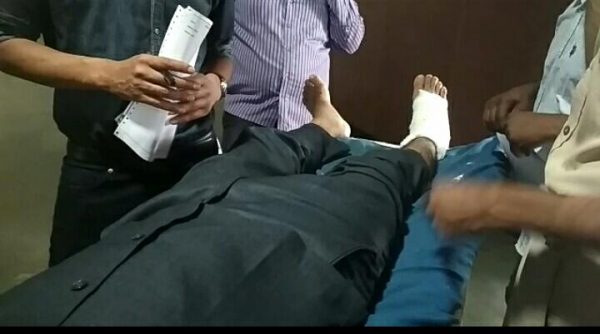 Udaipur : In a shocking incident, a sub inspector from Ratlam police, who was in Udaipur on-duty to nab a criminal, opened fire at the Udaipur police team when the latter chased the private car the SI was travelling in, when the car didnt stop at the police check post and took a U-turn instead. A constable from Gogunda police station sustained bullet injury on his leg and is hospitalized, while the Udaipur police has taken the service revolver from the SI and investigating the matter. Nothing was found from the car in which the two men were travelling, police said.

In his explanation , the SI told Udaipur police that he mistook the chasing police team for hooligans and thus opened fire for chasing his car. ” A case has been registered against the Sub Inspector and his aide for firing at the police team. Primary investigation reveals the cop was frightened and mistook the chasing police team to be rogues. Being stranger to the place and fearing the deserted road amid forest and hills, he perhaps opened fire for security reasons” Udaipur SP Kailashchandra Vishnoi said. IG Praful Kumar said the sub inspector had come here on official duty and at this initial stage there is no evidence to suspect that he was involved in any sort of smuggling.

A police team comprising of two sub inspectors and four constables were going to Bhilwara in search of an accused and the team halted in Udaipur city on Friday night. The team had reported their stay at the Surajpole police station and informed about their halt in the area to the local police. One of the SI Virendra Singh reportedly left for Pali with one of his acquaintance Deepak Aggrawal for some personal work in a private car which did not have a number plate. At Gogunda Highway the Gogunda police team had laid checkpost to curb drug peddling. When the SI’s car reached near the checkpost, instead of halting, the driver took a U-turn and tried to speed away. A police jeep chased the car and signaled them to stop. The police chased the car to some 6-7 kilometers and as they approached nearer to the car, Virendra Singh who was seated on the side seat, took out his revolver and shot at the vehicle. The bullet hit a constable named Hansraj Meena.

The Gogunda police raised an alarm and informed other teams at the next junction which stopped the car. Police officers claim when the team searched the car, nothing objectionable was found inside it, and in such a circumstances, why the two men tried to evade the checkpost is beyond understanding. Udaipur SP KailashChandra Vishnoi too went to Gogunda and interrogated the SI. ” Prima facie it doesnt appears that the cop was involved in any drug smuggling since nothing was found from the car. Some misunderstanding or miscommunication had occured ” Vishnoi told the media later. Meanwhile the SI in his statement said that he and his friend didnt see the checkpost due to dark outside and when they realized they had taken a wrong road, they took a U-turn which the Gogunda police team mistook as a run. Virendra Singh also said that he didnt knew it was the police team that was chasing them and so when the jeep came near, he opened fire taking them to be some rogues.