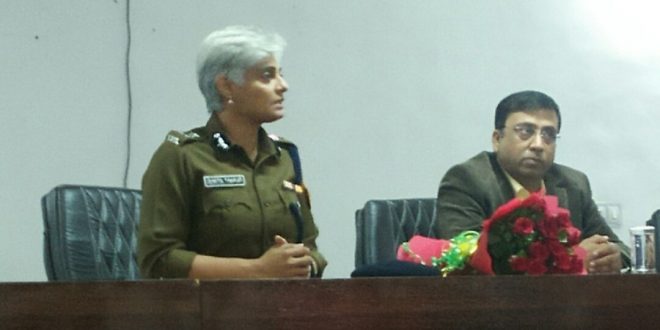 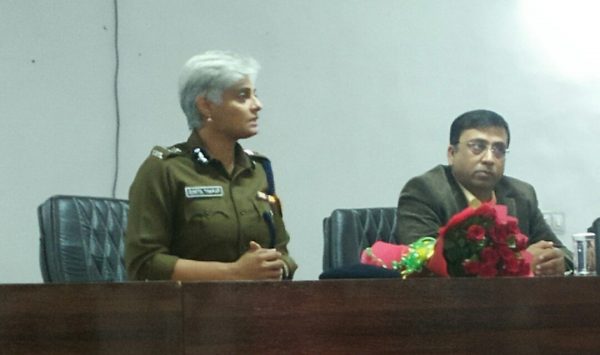 Udaipur : Inspector General of Police, Udaipur Binita Thakur urged youths to limit their time on electronic gadgets, social media and spend more time with parents. ” Chose any day in a week and ask everyone in the house to keep away their phones for few hours. Sit and talk with your parents. Then you will realize how much they love you and work hard to bring you up” she said while answering the query of a student on inculcating discipline in life.

Thakur was in an interactive session with the students at the University’s Law College here on Friday. The students posed up with questions related to corruption, negative image of the police among the common, their working hours etc which the IG answered with utmost patience. She appealed to the young minds to contribute their little bit  by becoming law abiders on the first hand. ” If you wear helmets, carry all documents while driving and do not bribe the policemen to find a ghillie to escape, it would be the first step to ensure law is maintained” she said. Speaking about its history, Thakur said ” The police system was introduced in India by the Britishers to basically repress the rebellions.

They had a different policing system for their people in England and an oppressive one for Indians. The police prevented people from doing something that was considered against their interests and hence unlawful  in those days.  And this is the basic reason why we Indians have a tendency to violate laws because our mindset have been such that we tend to do what has been told not to do” she said. Answering on a query related to tortures at police stations, Thakur said ” Tortures are now things of past. At present many soft skills are being taught to the police, We have a reception, help desk for women and children so that people do not fear to approach us”. Discussing the problems related to manpower shortage, vacancies the officer said that the poor population-police ratio is one of the major reasons that the cops are not able to tackle every issue minutely.

However, police tries it best to deliver justice despite all problems. ” Ours is the only department where maximum actions against staff is initiated on corruption charges, yet the perception remains negative that it is the most corrupt of all departments” she laughed. The officer also informed that a pilot project will be begin soon where selected law students would interact with the police department to solve certain cases where their is a need for a new perspective on investigation. ” We would benefit of the thoughtfulness of the raw minds who can give us a new angle to investigate a specific case which we would overlook in the normal course” she said.