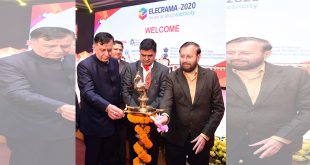 Raksha Rajya Mantri Shripad Naik visited the National Cadet Corps (NCC) Republic Day Camp 2020 at the Cariappa Parade Ground here today. Upon his arrival, Raksha Rajya Mantri inspected the Guard of Honour presented by a contingent of the three wings of NCC – the Army, Navy and Air Force. It was followed by a band display by the NCC cadets.

Shripad Naik also visited the ‘Flag Area’, prepared by NCC Cadets, depicting various social awareness themes and cultural activities. The cadets briefed him about their respective State Directorate themes, aimed at national integration and development. The Raksha Rajya Mantri also visited the ‘Hall of Fame’, a proud possession of the NCC, with display of rich archival collection of alumni photographs, models, motivational and other visual delights of the three wings of NCC.

In his address, Shripad Naik complimented the cadets for their smart drill and confidence. He recalled his days as an NCC cadet and appreciated the commitment of National Cadet Corps to groom future leaders. Highlighting the immense contribution of the NCC, he said, it was in the forefront of the organisations engaged in youth empowerment, promoting a unique mix of scholastic education and multifaceted activities, enabling all round development of its cadets.

The NCC Republic Day Camp 2020 is being attended by 2,155 cadets, including 732 girls, selected from 28 states and nine union territories. In addition, a total of 115 foreign cadets from 10 friendly countries are participating under the NCC Youth Exchange Programme.