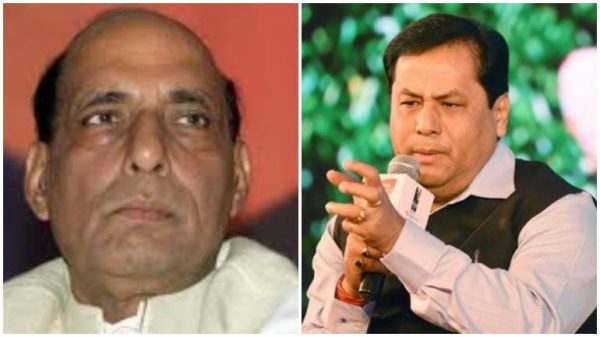 No genuine Indian citizen should worry about NRC: Assam CM

Guwahati, May 21 (Udaipur Kiran): Union home minister Rajnath Singh has reviewed the security scenario in Assam besides preparation to deal with any possible law and order situation which may arise after the publication of the final National Register of Citizens (NRC) on July 31.

The recent incident of grenade blast in Guwahati also came up for discussion during the meeting held at New Delhi.

Attended by chief minister Sarbananda Sonowal and top officials of the Union Home Ministry and the state government, the meeting presided by Singh took stock of the prevailing situation in Assam which last week had witnessed a blast, suspected to be carried out by the banned insurgent group ULFA, a Home Ministry official said.

“A detailed review on the present security scenario of Assam has taken place. We have also discussed about the possible situation which may arise after the publication of the final NRC,” Sonowal told reporters after the hour-long meeting.

The chief minister said that the state government is extending all assistance for the NRC updating process and is committed to provide security to all citizens.

“No genuine Indian should be worried about the outcome of the final NRC,” he said.

After the meeting, Sonowal reiterated that the people of Assam did not want any incident like bomb blasts to occur and they were pining for peace to prevail.

Appreciating the Assam Police for being able to nab all those behind the grenade blast in such a short time, Sonowal stressed the unequivocal condemnation of the dastardly incident from all quarters and asserted the state government’s resolve to strongly crush all such forces acting against the interest of the state and its people.

The state government was striving towards bringing rapid development to the state and for that purpose, maintaining a peaceful environment is a must, he said.

Sonowal said that the whole process of NRC was being monitored and supervised by Supreme Court in a very transparent manner and the state government was extending its full support to ensure that no genuine Indian citizen was left out of the NRC.

He also called on all genuine citizens not to panic in any situation and he assured of all help to the people during the claims and objection process of NRC.

When the draft NRC was published on July 30, 2018, there was a huge controversy over the exclusion of 40.7 lakh people from it. The draft NRC included the names of 2.9 crore people out of the total 3.29 crore applications.

Some 30 lakh of the 40.7 lakh people, left out of the draft of NRC, filed for inclusion of their names in the document. Also, around 600 objections were submitted by individuals who suspect the citizenship of others who made it to the list.

The Supreme Court, which is monitoring the NRC update process, has made it clear that the final NRC has to be published on July 31, 2019.

Of the 40.7 lakh people whose names did not figure in the draft NRC, 37.59 lakh names were rejected and the remaining 2,48,077 were on hold. However, they were given an opportunity to prove their Indian citizenship with 1971 as the cut-off year. The verification process is being carried out for these people who had submitted documents afresh.

The Supreme Court-monitored NRC exercise, aimed at identifying illegal immigrants in the state that borders Bangladesh, was carried out only in Assam, which faced influx of people from Bangladesh since the early 20th century.

When the NRC was first prepared in Assam way back in 1951, the state had 80 lakh citizens.

According to the 2011 census, Assam’s total population is over 3.11 crore. The process of identification of illegal immigrants in the state has been widely debated and is a contentious issue in state politics.

A six-year agitation demanding identification and deportation of illegal immigrants was launched by the All Assam Students Union in 1979. It culminated with the signing of the Assam Accord on August 15, 1985, in presence of the then Prime Minister Rajiv Gandhi.

West Bengal chief minister Mamata Banerjee had claimed that the NRC exercise was carried out with a “political motive” to divide people and warned that it would lead to “bloodbath” and a “civil war” in the country.

Following exclusion of over 40 lakh people in the draft NRC, Banerjee had also said those “Indian citizens have become refugees in their own land”. She had alleged the NRC was an “attempt to evict Bengalis from Assam”.