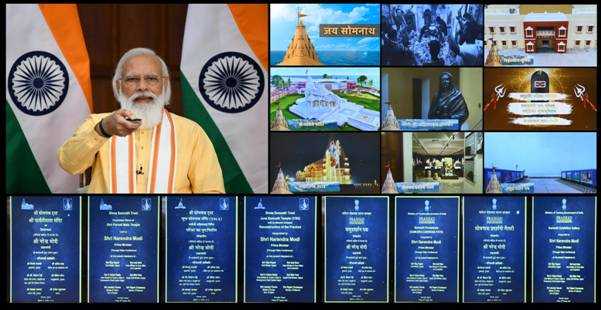 Congratulating the devotees all over the world, the Prime Minister paid tribute to Sardar Patel who showed indomitable will power for the revival of India’s ancient glory. Sardar Patel linked Somnath Mandir with independent spirit of independent India. Modi said that it is ‘our good fortune that we are taking forward the efforts of Sardar Saheb in the 75th year of Independence and imparting new splendour to Somnath Temple. The Prime Minister also remembered Lokmata Ahilyabai Holkar who renovated several temples from Vishwanath to Somnath. Country is moving forward taking inspiration from the blend of modernity and tradition in her life, said the Prime Minister.

The Prime Minister said that in initiatives like Statue of Unity and transformation of Kachch, Gujarat has seen from the close quarters, the results of linking modernity with tourism. ‘It has been demand of every time period that we look for new possibilities in religious tourism and strengthen the links between pilgrimage and local economy” the Prime Minister pointed out.

The Prime Minister said that Lord Shiva gives rise to development and creativity amidst annihilation and destruction. Shiv is unending, can’t be expressed and eternal. ‘Our faith in Shiva makes us aware of our existence beyond the limits of time, gives us the strength to face the challenges of time’, said the Prime Minister. 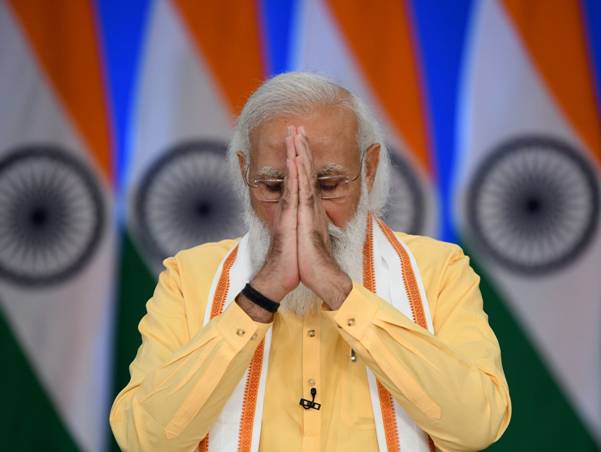 Reflecting on the history of the revered temple, the Prime Minister recalled the repeated destruction of the temple and how the temple rose after every attack. ‘It is a symbol of the belief that truth can’t be defeated by falsehood and faith can’t be crushed by terror.’ “The destructive powers, the thinking that tries to establish an empire on the basis of terror, may dominate temporarily, but, its existence is never permanent, it cannot suppress humanity for a long time. This was true when some attackers were demolishing Somnath, it is equally true even today, when the world is apprehensive of such ideologies.” the Prime Minister insisted.

The Prime Minister said that reconstruction of Somnath temple to grand renovation is due to centuries of strong will and ideological continuity. ‘Great men like Rajendra Prasad ji, Sardar Patel and KM Munshi faced difficulties for this campaign even after independence. Still, finally Somnath Mandir got established as divine pillar of modern India in 1950. The Country is moving towards amicable solutions of difficult problems. A bright pillar of the glory of modern India is coming up in the form of Ram Mandir’, he said

He said that our thinking should be to learn from history to improve our present and create a new future. Referring to his mantra of ‘Bharat Jodo Andolan’, Modi said that this is not just geographical connectivity but connect in thoughts also. ‘This also is a pledge for connecting the building of future India with our past’, said the Prime Minister. The Prime Minister said “For us essence of history and faith is SabkaSaath, Sabka Vikas, Sabka, Vishwas and SabkaPrayas”.The Prime Minister highlighted the role of the faith and belief system in the underscoring the unity of India. He said ‘From Somnath and Nageshwar in the west to Vaidyanathin the east, from Baba Kedarnath in the north to Rameshwar, at the extreme southern end of India, these 12 Jyotirlingas serve to connect the whole of India. Similarly, the arrangement of our four dhams, the concept of our Shaktipeeths, the establishment of different pilgrimages in different corners of our country, this outline of our faith is actually an expression of the spirit of ‘Ek Bharat, Shreshtha Bharat’.’

Continuing with the role of spirituality in strengthening the unity of the nation, the Prime Minister dwelled upon the national and international potential of tourism and spiritual tourism. He said that the country is reviving the ancient glory by building modern infrastructure. He gave example of Ramayana circuit which is apprising the Ram Bhakts about new places related to lord Ram and making them feel how Lord Ram is entire India’s Ram. Similarly Buddha Circuit providing facilities to the devotees from world over. The Prime Minister informed that Tourism Ministry is developing tourist circuits on 15 themes under Swadesh Darshan Scheme, creating opportunities for tourism in neglected areas. Developments in hilly areas like Kedarnath, tunnel and highways for Char Dhams, development work in Vaishnao Devi, high-tech infrastructure in the Northeast are bridging the distances. Similarly, under PRASHAD Scheme, announced in 2014,the Tourism Ministry is developing 40 major places of pilgrimage out of which, 15 are already completed. In Gujarat, work is on for three projects worth over 100 crore. Attention is being paid to connect the places of pilgrimages. The Prime Minister said that the country is not only connecting common citizens through tourism but is moving forward too. ‘The Country has moved from 65th place in 2013 on Travel & Tourism Competitiveness Index to 34th place in 2019. Addressing on the occasion, the Home Minister Amit Shah said that after becoming the Prime Minister in 2014, Narendra Modi brought pilgrimages of all religions under ‘PRASHAD’ (Pilgrimage Rejuvenation and Spiritual, Heritage Augmentation Drive) Scheme and emphasised on their infrastructure and development of amenities for tourists in surrounding areas.

The Home Minister explained that since last seven years, many pilgrimages have been benefitting from the ‘PRASHAD’ Scheme and devotees of all religions are able to pay their obeisance at their respective pilgrimages. He said that on the shores of the Arabian sea, a one-and-a-half kilometer long and eight metre wide corridor has been constructed where tourists can relax in the evening with their families and feel like being at a tourist spot.

Amit Shah further said that in order to enable devotees witness Somnath and the Prayer digitally, the Prime Minister made several efforts and monitored them and as a result, digital prayers of Somnath are now amongst the top viewed prayers.

Chief Minister of Gujarat Vijaybhai Rupani said that the development of Somnath has assumed a new direction under the guidance of Prime Minister Narendra Modi. He further added that the state government is committed to the development of Somnath as a Tirtha Sthal(pilgrimage place) as per the vision of the Prime Minister. Rupani appreciated the support of Union Tourism Ministry for  several projects and facilities at Somnath under PRASHAD scheme.

The ‘National Mission on Pilgrimage Rejuvenation and Spiritual, Heritage Augmentation Drive’ (PRASHAD) was launched by the Ministry of Tourism in the year 2014-15 with the objective of integrated development of identified pilgrimage and heritage destinations. The concept of universal access is the first and foremost dimension is being taken care of while finalizing and executing the projects under the scheme. The scheme aimed at creation of pilgrimage / religious and heritage tourism infrastructure development at the destinations. At present total 37 projects in 24 states (including 15 completed projects) are approved with estimated cost of Rs. 1214.19 crore and a total amount of Rs. 675.89 crore has been released for these projects under the scheme.

The development works of Juna Somnath Mandir Premises include a ramp for universal access, CourtyYard, sitting arrangements for the pilgrims, 15 shops, lift and two large halls with an expenditure of Rs. 3.5 crore by Shree Somnath Trust.

The proposed Parvatimata Mandir in Shree SomnathTemple premises would be a grand structure with an area of 1650 Met2 and 71 Ft. height using Aras Stones from Ambaji, Banaskantha. There would be 44 poles, as were there in the original temple, which would be created using Marble with an artistic way. The core Garbh Grih of the Madir contais the land of 380 Met2, and Dance Mandap spreading over 1250 Met2.

New projects under pipeline for the State of Gujarat under PRASHAD Scheme are: Development of Pilgrimage Amenities at Maa Ambaji Temple, Banaskantha and Development of Public Plaza / Entry Plaza at Somnath.

The Public Plaza/Entry Plaza would be state of art facility to manage the pilgrim’s movement and regulate the pedestrian movement in the temple premises. The state of art facility hosts parking facility for specially abled citizens and emergency vehicles (ambulance and firefighting). The entry plaza building will host facilities like rest rooms, cloak rooms, cafeteria, and other public facilities like gender-based toilets and pilgrims’ que complex with canopy to regulate crowd during peak time. The location of facility has been proposed in cognizance with the Master Plan prepared under Iconic Destination Development scheme (IDDS). Under the project for Ambaji Temple, basic pilgrimage tourism infrastructure like Tourist Facility Centre, Parking, Public Amenities, Cloack Room, development of stairs at Gabbar Hill and other facilities are likely to be developed.

Development of Somnath has been proposed as one of the iconic tourism destinations by the Ministry of Tourism under its Integrated Destination Development Scheme (IDDS) for development of components such as Prabhas Patan Museum, Tourist Amenities, Haat etc. A few regional interventions such as Keshod Airport, improvement of NH-51, development of Sea Plane services etc. for providing improved connectivity to Somnath, ensuring a comprehensive and broad development of the entire region are also proposed under this under consideration project.

In addition to above, following projects under SwadeshDharshan Scheme of the Ministry of Tourism have been approved for the State Government of Gujarat: