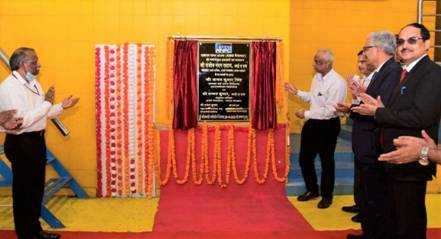 The visiting dignitaries were welcomed by Nanhe Ram, General Manager (In-Charge), Salal Power Station and other Senior Officers from NHPC, CISF and Civil Administration at Ramleela Ground, Jyotipuram. This was followed by Guard of Honour by CISF.

Speaking on the occasion, Secretary (Power) appreciated the initiatives taken by Salal Power Station under the dynamic leadership of CMD, NHPC for improving the performance of the Power Station and expressed happiness to visit one of NHPC’s prestigious Power Stations. He emphasised for time bound delivery of the hydro projects and said that GOI has already taken initiatives for promoting hydro projects through new hydro policy in March 2019. He further called for undertaking development of pump Storage Schemes by NHPC for ensuring grid stability taking into consideration the high penetration of Renewable Energy in the Indian Grid.

A.K. Singh, CMD, NHPC expressed his gratitude to Secretary (Power) for taking time off his busy schedule and visiting the Salal Power Station which reflected the due importance being given to hydropower projects by Government of India .