Home / HEADLINES / “PMKVY 3.0 will take skilling to the remotest of villages and towns in India; States and Districts will have an increased responsibility”: Dr. Mahendra Nath Pandey

Dr. Mahendra Nath Pandey, Hon’ble Union Minister, MSDE launched the third edition of PMKVY in a virtual ceremony along with RK Singh, Hon’ble Minister of State, MSDE. Aimed at supporting the local economy, PMKVY 3.0 has been designed to keep pace with changing demands, both at the global and local levels. 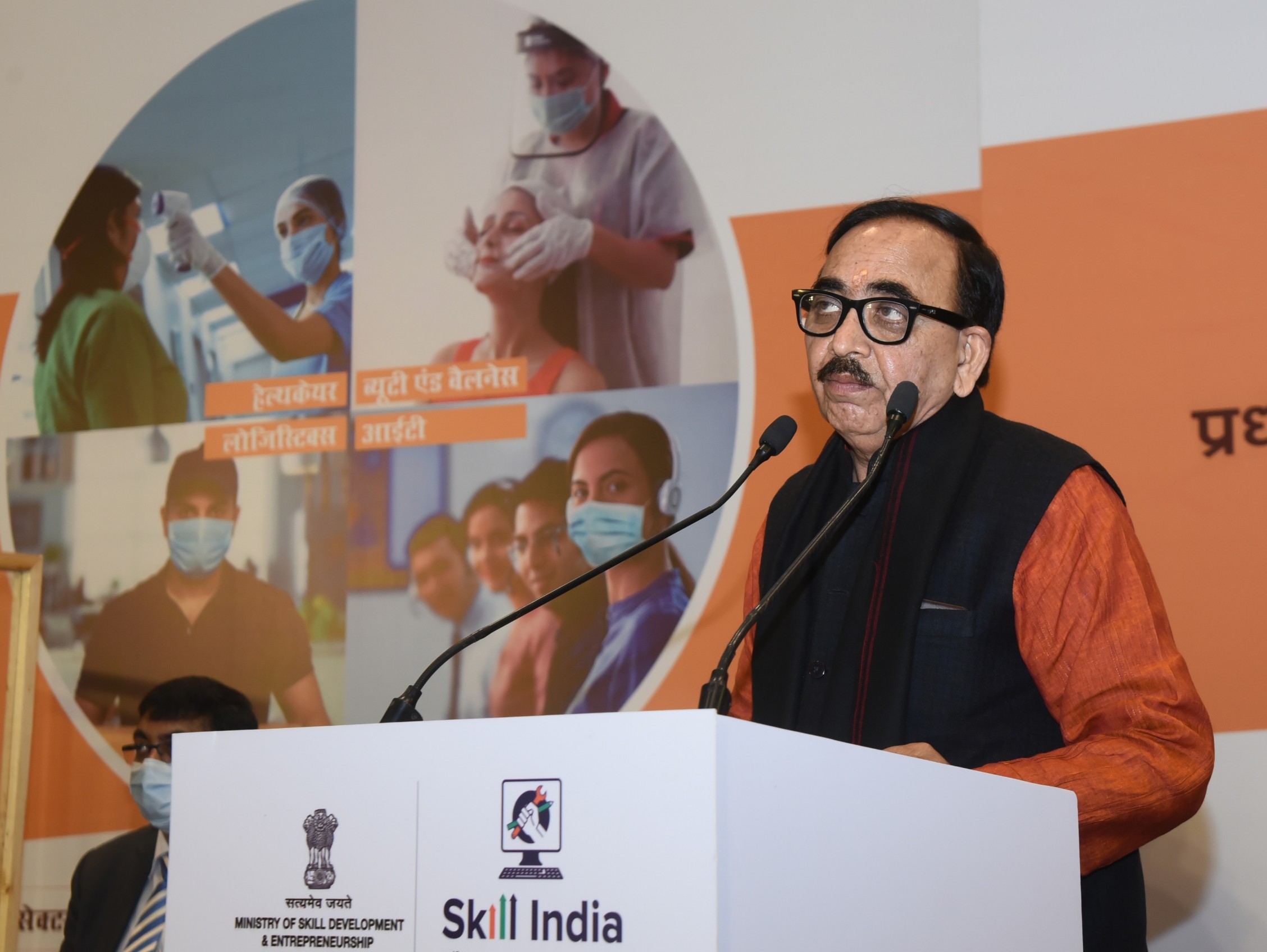 Launched in 717 districts, 28 States/eight UTs, PMKVY 3.0 marks yet another step towards ‘Atmnanirbhar Bharat’. PMKVY 3.0 will be implemented in a more decentralized structure with greater responsibilities and support from States/UTs and Districts. District Skill Committees (DSCs), under the guidance of State Skill Development Missions (SSDM), shall play a key role in addressing the skill gap and assessing demand at the district level.  The new scheme will be more trainee- and learner-centric addressing the ambitions of aspirational Bharat.

PMKVY 2.0 has been instrumental in bolstering the skilling ecosystem and with PMKVY 3.0, skill development will usher in a new paradigm with focus on demand-driven skill development, digital technology and Industry 4.0 skills. The Government’s growth agenda is guided by ‘Aatmanirbhar Bharat’ and ‘Vocal for Local’ vision. Keeping this in mind, PMKVY 3.0 is a progressive step towards achieving the vision by establishing increased connect at state, district and block level. PMKVY 2.0 broadened the skill development with inclusion of Recognition of Prior Learning (RPL) and focus on training. With the advent of PMKVY 3.0, the focus is on bridging the demand-supply gap by promoting skill development in areas of new-age and Industry 4.0 job roles

While the National Educational Policy puts focus on vocational training for a holistic growth and increased employability, PMKVY 3.0 role will be a propagator of vocational education at an early level for youth to capitalize on industry-linked opportunities Dr. Mahendra Nath Pandey, Hon’ble Minister of Skill Development & Entrepreneurship, said, “Prime Minister’s vision of “Vocal for local and Atmanirbhar Bharat can only be achieved by furthering the skilling ecosystem to the district level. As a young nation, we’re poised to seize the opportunities that will make India the Skill Capital of the World. By taking the bottom-up approach to training, PMKVY 3.0 will identify job roles that have demand at the local level and skill the youth, linking them to these opportunities.”

“The increased role of district administrations and MPs in mentoring and monitoring the training programs under the schemes will bring in greater local connect. PMKVY 3.0 will encourage healthy competition between states by making available increased allocation to those states that perform better,” he added.

RK Singh, Union Minister of State (I/C) Ministry of Power, Ministry of New and Renewable Energy and Minister of State, MSDE, said, “Skilling is not an objective but a necessary prerequisite for the economic growth of the country. We need to move with speed and scale if we have to fulfil the vision of making India the skill capital of the world and from there, the industrial capital of the world.”

The launch saw participation of various Members of Parliament and Skill Development Ministers from six states. Candidates from Pradhan Mantri Kaushal Kendras (PMKKS) in Meerut, Uttar Pradesh; Satna, Madhya Pradesh; Meethapur, Badarpur; Cuttack, Odisha; South Delhi also interacted with the ministers, and shared inspirational experiences of how skill training has transformed their lives and taken them closer to fulfilling their aspirations. In a freewheeling discussion, candidates spoke about additional courses they felt the need to train in their respective centres.

Both ministers assured candidates and heads of PMKK centres that they would be provided the additional courses that will help them cater to local demand. Amid messages congratulating MSDE for the success of PMKVY 1.0 and 2.0, ‘vocal for local’ emerged as a recurring theme, as all MPs and PMKK centres spoke about the need to build a local talent pool that can cater to industry demands.

Members of Parliament from eight constituencies across the country interacted with Dr. Mahendra Nath Pandey and RK Singh to talk about skill development efforts in their states and welcomed the third phase of PMKVY. Additionally, State Skill Ministers from six states — Gujarat, Odisha, Assam, Haryana, Uttar Pradesh and Karnataka — extended their best wishes to the program. 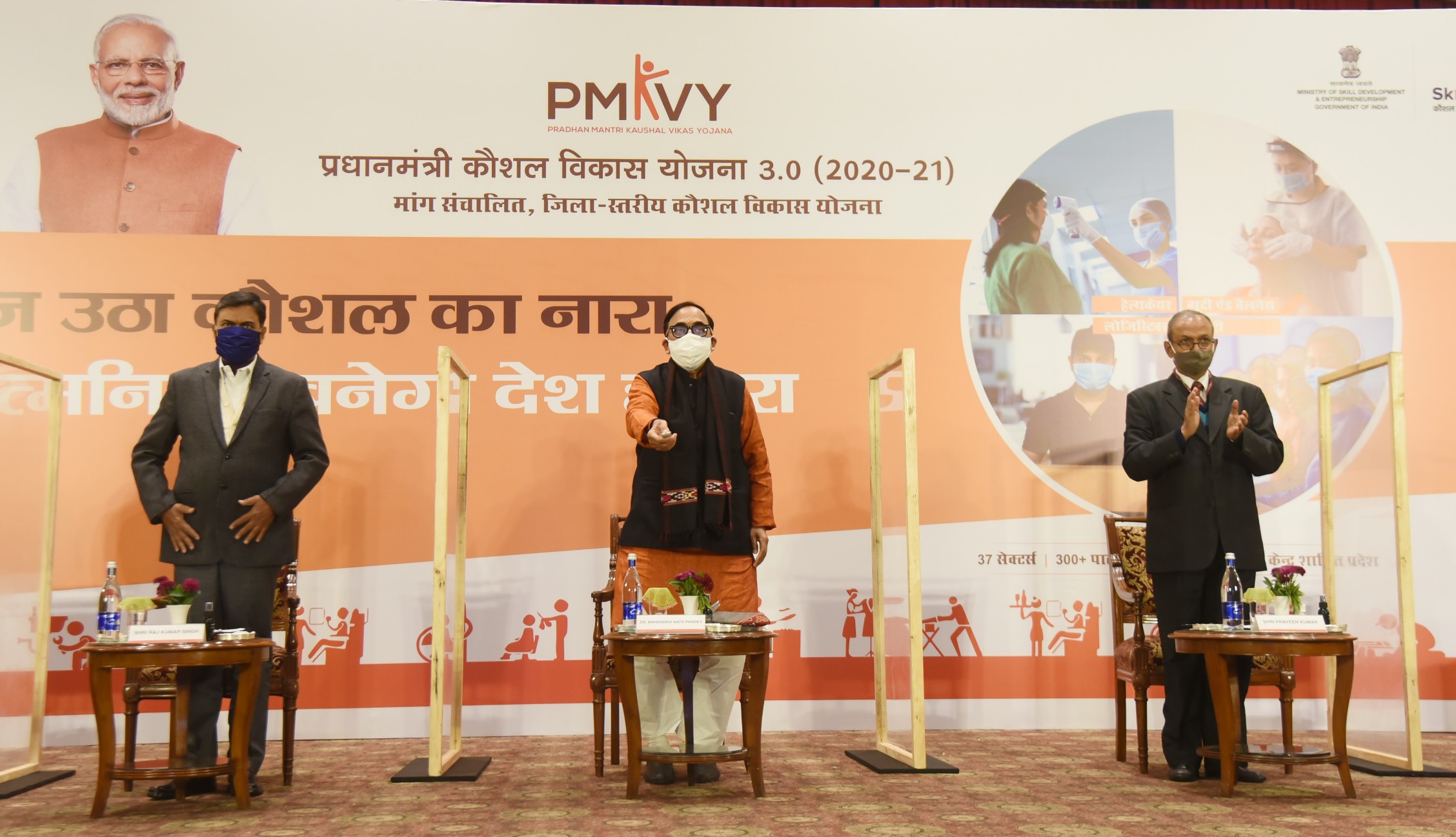 For more information on Skill Development, please follow the links below: