The Prime Minister said he is fortunate to have got the opportunity to release a special commemorative coin of 100 rupees in honour of Rajmata Vijaya RajeScindiaJi.Referring to Vijayarajeji’s book, the Prime Minister said in the book, he was introduced as a youth leader of Gujarat and today after so many years, he is serving as the Pradhan sevak of the country. 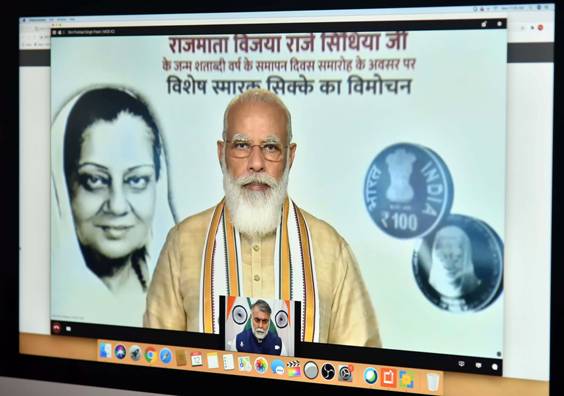 Speaking on the occasion, the Prime Minister said Rajmata Vijaya RajeScindia was one of those who led India in the right direction. She was a decisive leader and a skilled administrator. He added that she witnessed every important phase of Indian politics be it burning of foreign clothes, the Emergency and the Ram Temple movement. He stressed that it is important for the present generation to know about Rajmata’s life and therefore, it is necessary to repeatedly mention about her and her experiences. The Prime Minister said Rajmata has taught us that for public service, it is not necessary to be born in a particular family. All that is needed is love for the nation and a democratic temperament. These thoughts, these ideals can be seen in her life. Rajmata had thousands of employees, a magnificent palace, and had all the facilities but she dedicated her life for the cause of common people, for the aspirations of the poor. She was always connected and committed to Public service. He said Rajmata had dedicated herself for the future of the nation. She had sacrificed all her happiness for the future generations of the country. Rajmata did not live for the position and prestige, nor did she do politics.He recalled a few occasions when Rajmata turned down many positions with humility. He said Atalji and Advani ji once urged her to become the president of the Jana Sangh but she accepted to serve the Jana Sangh as an activist instead.

The Prime Minister said Rajmata loved to recognize her companions by name, and this feeling towards a worker should be in everyone’s mind. Respect, not pride, should be the core of politics. He described Rajmata as a spiritual personality.

The Prime Minister said due to public awareness and mass movements, many changes have taken place in the country in the past few years and many campaigns and schemes have become successful. He highlighted that the country is moving ahead on the path of development with the blessings of Rajmata.

The Prime Minister said today the Nari Shakti of India is advancing and is leading in various fields in the country. He listed the initiatives of the Government which helped in fulfilling the Rajamata’s dreams of women empowerment.

The Prime Minister said it is also a wonderful coincidence that her dream of Ramjanmabhoomi temple for which she fought, has been fulfilled in the year of her birth centenary.  He said the success of Atmanirbhar Bharat will help us in realising her vision of a strong, secure and prosperous india.

Speaking on the occasion, Union Culture Minister said that Rajmata VijayarajeScindia had simplicity like a Paras stone. He shared his own experience with Rajmata VijayarajeScindia and said that she did politics but there was no political faction or ambition in her work. Her politics was the politics of values. She was against compromising her values ​​to achieve political goals. He said that Rajmata Scindia had everything that a person struggles for. If she wanted, she could live her life comfortably but she made public service her goal.

Governors and Chief Ministers of several states along with family members of Vijaya Raje Scindia also attended the virtual ceremony. Secretary, Ministry of Culture Raghvendra Singh welcomed the Prime Minister and all the dignitaries and coordinated the programme.

The coin has been released in celebration of birth centenary of Rajmata Vijaya RajeScindia. The special commemorative coin was minted by the Finance Ministry as a part of these celebrations.

Pl click here for full speech of PM and video of programme.