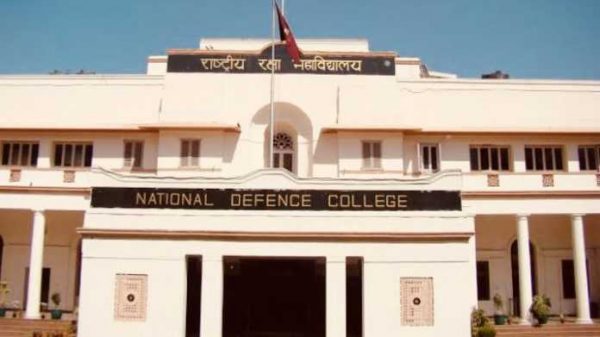 The two-day webinar organised by the National Defence College on 5th and 6th November as part of its Diamond Jubilee celebrations concluded today. The Webinar on the theme “India’s National security: the Way Ahead’ witnessed wide participation across the strategic community with a galaxy of national & international speakers providing comprehensive perspective on issues of national security.

The highlight of the final day was the address by the Chief of Defence Staff followed by the Service Chiefs & the Home Secretary.  Speaking at the session titled “India’s Security Horizon: The Coming Decade’ the CDS highlighted the structural reforms underway in the armed forces to face the contemporary challenges. While underlining the role of the National Defence College in the strategic enculturation of leaders from military and bureaucracy, he complimented the College for the initiative in these challenging times.  He said that the need of the hour for the armed forces is to embrace change, adopt cutting edge technology and theaterise for greater operational efficiency. Subsequently the Chief of Naval Staff, The Chief of Air Staff and the Vice Chief of Army Staff provided a perceptive view of India’s future security challenges and the evolving roles of the maritime, air and land components in future wars. The session concluded with the address of the Home Secretary AK Bhalla who outlined the internal security challenges and the initiatives underway to synergise response between the Centre and the States.

The Webinar concluded with the address of the Defence Secretary Ajay Kumar. Proposing the vote of thanks, Commandant National Defence College Air Marshal D Choudhury, AVSM, VM, VSM conveyed his gratitude to the speakers for their participation and providing candid views as well as different perspectives on complex issues.