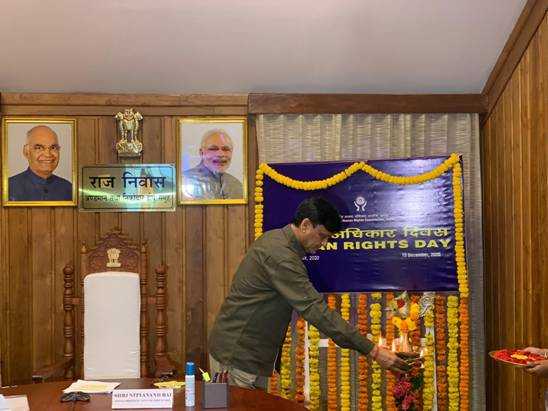 Human Rights Day was celebrated by the National Human Rights Commission (NHRC) in New Delhi today. Union Minister of State for Home Affairs Nityanand Rai was the Chief Guest at the programme. In his address through virtual mode, Rai said human rights have existed in India since the Vedic period. The lines, Sarve Bhavantu Sukhina Sarve Santu Niramaya in the Vedic Mantras, contain the spirit of the whole of humanity. He said that Prime Minister Narendra Modi is always sensitive to mankind and to humanity and service to humanity is his life’s goal. Rai also said that the Union Home Minister Amit Shah is committed to empower the Human Rights Commission.

Nityanand Rai said that the UnionGovernment has given high priority to the welfare and development of the weaker sections of society. The rights of the weaker sections can be protected, not only whenthey are aware of their rights, but their grievances are also addressed. He said the role of local panchayats is very important in the promotion and protection of Human Rights. Hence efforts have been made to empower them.

The Union Minister of State for Home Affairs said that during the Corona pandemic, the government ensured the right to food of every person through the Pradhan Mantri Garib Kalyan Yojana, so that no one would go hungry. Apart from this, wages have been increased under MGNREGA for the empowerment of workers in rural areas.The government directly transferred money to the accounts of migrant labourersaffected by Covid-19, through DBT to ensure the protection of their rights.

Appreciating the work done by the National Human Rights Commission for the promotion and protection of Human Rights andreferring to the people’sbelief in the commission, the Union Minister of State for Home Affairs said that the commission has played its role as a quasi- judicial watchdog without fear and favour. He added that strengthening ofHuman Rights at the grassroots level is the collective responsibility of society.

Nityanand Rai said that security forces have an important role in protecting Human Rights. In addition to discharging their duties with full courage, security forces are also showing utmost sensitivity towards the Rights of citizens.

In his address, Member, National Human Rights CommissionJustice P.C. Pant, said that this year has been very tough globally for humanity, due to the COVID-19 pandemic. This has required a cohesive response from the public healthcare system as well as from the general public. The success of the public healthcare system’s response in dealing with this grave situation, depends on how deep-rooted our fundamentals for respecting Human Rightsare.This is a time to reaffirm our commitment that Human Rights should form the basis of all State policies.

Justice P.C. Pant asserted that over the last 27 years, the Commission’s constant endeavourhas been to make itself accessible as much as possible to the people. But extraordinary times require extraordinary responses. The Commission has also responded to the challenges created by the COVID-19 pandemic, by moving most ofits activities from the offline mode to the online modethis year.

The program was attended by the Secretary General of the National Human Rights Commission ShriBimbadhar Pradhan, former Chairpersons and Member of NHRC, Chairman and Members of various State Human Rights Commissions, Representatives of Central and State Governments, Diplomats, Members of Civil Society, Representatives of NGOs and other dignitaries.