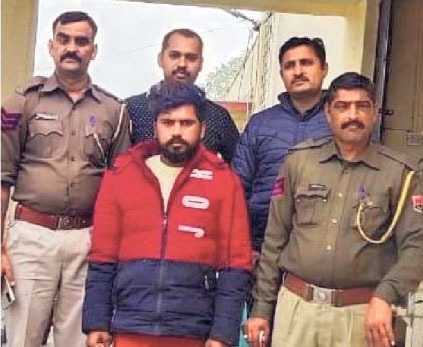 Udaipur : Acting on a tip off, Udaipur police arrested a man hailing from Madhya Pradesh who was found roaming around with a pistol inside his clothes. When the cops took him in custody and asked the reason for carrying the weapon, the accused said he planned to kill his girlfriend who had broken up with him and her family had lodged an eve-teasing case against him in a police station.

On Saturday, the Goverdhan Vilas police received an information about a man who had a pistol and was in lookout for bullets. The police caught Krishna SIngh (28) alias Kana son of Bhanwar Singh, a resident of Ratangarh in Neemuch riding a scooter on the Udaipur-Ahmedabad Highway near South Extension area. The police found the pistol hidden inside his jacket and arrested him under the Arms Act.

IPS probationary JItendra SIngh Rathore said the accused had no criminal record. He told the police that after his father’s death in 2009, he came from MP looking for a livelihood in Udaipur and lived with a relative here. Later he began a mobile repairing shop in Hiran Magri Sector-11 area. A school going girl from the neighborhood became his friend and gradually they developed romantic feelings for each other. Three months ago, the girl’s father refused their marriage and lodged a complaint against him at the Surajpole police station. The dispute was settled and the girl stopped seeing the accused after the incident.

When the accused tried to persuade her for marriage again, her father lodged an eve-teasing case at the Goverdhan Vilas police station. The accused told the police that he had decided he would kill the girl and later commit suicide. He purchased a pistol from Madhya Pradesh and was looking for bullets in Udaipur.