MoS, Dr Jitendra Singh congratulated them for  the BJP’s victory in the  LAHDC elections which was made possible  and successful  under the leadership of Prime Minister Narendra Modi. He said, these elections assumed special significance since this was the very first electoral exercise after Ladakh became a Union Territory. 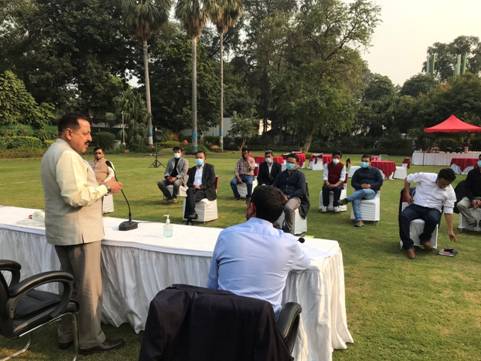 While addressing the delegation, Dr Jitendra Singh said that Prime Minister Narendra Modi gave highest priority to the demands of Ladakh and other peripheral regions. He said, it was for the first time under the Modi government that Ladakh had been granted a University, a Medical College and an Engineering College. The Minister said that  this government has always “walk on the talk “ and fulfilled its all commitment for the region.

Speaking about the connectivity issue of the region, MoS said that with opening of Atal Tunnel (also known as Rohtang Tunnel) and the under construction Zoji La Tunnel the all weather connectivity with this peripheral region will give big economic and security boost to the region. And this became a reality only under the able leadership and unflinching will of the Prime minister, Narendra Modi. While discussing about the  various projects, Dr Jitendra Singh said that  a mega project on solar technology plant is being established in the region which will make it capable of  providing enough  electricity and energy for the people  and various projects in the area.

The Minister also mentioned about the preparation of the policy and action plan for “Carbon Neutral” Ladakh as announced by Prime Minister Narendra Modi. He said that the Union Territory government is earnestly working on a comprehensive plan which would be ready to be placed before the higher authorities.

The Union Minister also referred to the 50 crore special development package for Ladakh and said this was for the first time that any Central government had been so liberal in funding the various projects for the region. He said, this will be the first of its kind roadmap devoted exclusively to the Ladakh region.

The delegation briefed the Union Minister about the current scenario following the LAHDC elections and also apprised him of the progress of various Centrally funded projects.

In the concluding remark the Chairman, LAHDC, Leh thanked Dr Jitendra Singh for his continuous support and for his day to day coordination in taking up various Ladakh related matters with different Ministries at the Centre.