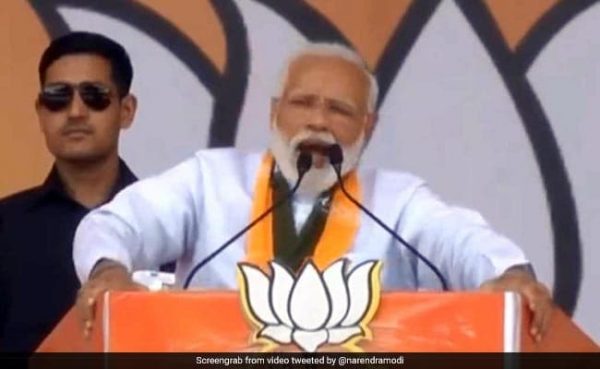 Balia : Prime Minister Narendra Modi on Tuesday threw an open challenge to the opposition to prove if he owns nami or benami property,land,buglow or car. Replying to the Congress and other opposition parties’ charge at an election rally here, he also asked  them to prove if he owns a farm house or set up a Mall.The reference could be to Lalu Prasad Yadav and Sonia Gandhi families which are facing these charges.
Leaders of all these parties including the SP and the BSP have looted the govermment and the poor and become rich through such mal-practices,Modi alleged.” I have been a chief minister for a longer time than these leaders but stand no where near them as far as bank balance or  property is concerned”.
The Prime Minister slammed these parties for playing “caste cards” and claimed that neither has he used caste to gain anything including vote nor will he do so in future.” Though I was born into a maha backward family,I have risen above caste and is striving for betterment of men and women of every caste”.
“Poverty removal and Sab Kaa Saath,Sab Kaa Vikas are my aims and I will fight to achieve them till my end”,he promised.His other aims are to see India on the top of the world economically and provide security to the country.
He said he wantsto  help the poor because he has lived his life and seen poverty and miseries from close quarters.
According to him,the alliance partners in the state have seen the writing on the wall.”They know that the BJP is much ahead in this state and others and that is why they have resorted to gaali politics.Their frustration is showing”.
Modi said only a strong government at the Centre can provide security and make the country prosperous. A week government cannot take a bold decision like air strike.The Mahamilawatis can only form a weak, Khichdi government.
“My mantra is samman to the poor and safety and security of the nation”, he claimed. Balia is one of 13 constituencies where votes will be cast in the final round on Sunday.The state has 80 constituencies in total. Modi who is likely to visit the state again on Thursday is scheduled to address two rallies  in neighbouring Bihar today.
Please share this news
2019-05-14
chundawat