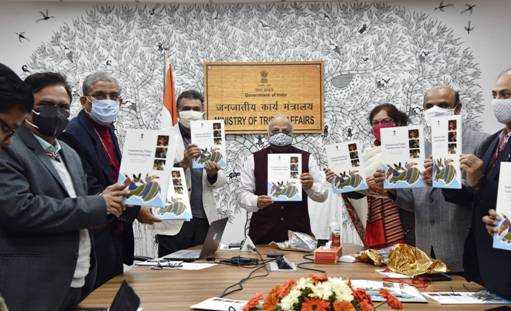 The Ministry of Tribal Affairs (MoTA) received the coveted “SKOCH Challenger Award”-“Best Performance in e-Governance” today for its various initiatives taken during last year. The Award was received by the Union Minister for Tribal Affairs, Arjun Munda, at the Virtual SKOCH Summit.The Ministry also received 3 Gold Awards for its initiatives namely “Eco-Rehabilitation of tribal villages through Innovative design in water management using Ice-stupa”, Swasthya: Tribal Health and Nutritional Portal and the Performance Dashboard “Empowering Tribals Transforming India”  which were received by Dr Naval Jit Kapoor, Joint Secretary on behalf of the Ministry.

Arjun Munda spoke on “Samavesh ki LokNiti” highlighting different initiatives taken by the Ministry for tribal welfare in area of education, health and livelihood. He also released a booklet on key reforms and initiatives undertaken by Ministry under visionary leadership of the Prime Minister Narendra Modi during last few years.  While going reference to Mungerkar Committee report of 2009 and Census figures, he said that tribal areas being the richest in mineral and rich natural resource base are inhabited by the poorest people of the country. He said that his Ministry is ensuring digitalization to ensure that the benefits reach tribal areas and their lives are transformed through various initiatives. “Our digital initiative will step up delivery of services and programmes in remote tribal areas ”, the Minister explained. Sh Arjun Munda said that just spending funds is not sufficient, what is important is to see how much  benefit has reached the tribals, how it has transformed their lives and what permanent institutional mechanisms were created in the process. The Minister opined, ”Everybody talks about utilizing tribal resources but there is hardly any discussion about developing the tribals as a resource”.

Mr Deepak Khandekar, Secretary, MoTA said that  to assimilate with the larger vision of ‘Digital India’ and to realize the cherished goal of e-governance all 5 Scholarship Schemes are  end to end digitalized and has enabled smooth transfer of scholarship to the account of 30 lakh beneficiaries every year. The availability of data on  Performance dashboard adds to the transparency.

Speaking on occasion, Sh. Sameer Kochar, Chairman SKOCH group said that SKOCH Challenger Award is non-competitive and conferred for having made a definitive impact on governance improvement and growth of India. These are based on primary research and recommendations by the Collegium of past SKOCH Challenger Awardees and the Distinguished Fellows of SKOCH Development Foundation. Previously this award has been conferred on Ministry of Rural development, Ministry of HRD and Ministry of Urban Affairs.  He talked about IT Initiatives of Ministry including development of 4 Scholarship Portals, Health and Nutrition Portal, Sickle Cell Disease Support Corner, Performance Dashboard.

Ice- Stupa is a unique project to solve the water problem in the Ladakh region which faces shortage due to climate change and has caused displacement of villagers in search of job opportunities. The structure is built comprising of locally found material with large water retention capacity, which looks like Stupa.  MoTA in partnership with the Students’ Educational and Cultural Movement of Ladakh (SECMOL) are making these Ice Stupas through community participation. This yr 26 Ice Stupas were formed saving 60 million litres of water.

Ministry of Tribal Affairs is not only implementing its own schemes but also monitoring Central and State Schedule Tribe Component (earlier known as Tribal Sub plan) which has budget of more than 2 lakh crore per annum.  Despite such a huge budget, tribals still lag behind in most of indicators. In last 2 years, to fulfil Digital India goals, Ministry has end to end digitalised all its schemes to ensure that amount spent on tribal welfare is effectively monitored.   Ministry has partnered with reputed organizations to develop innovative models with various Non-Governmental and private sector as partners. The objective is to dismantle inefficient and burdensome practices and encouraging best practices.

The other IT Initiatives of Ministry which are linked to the Performance Dashboardare  National Tribal Research Portal,, Tribal Repository of research papers,   NGO Grant Tracking System, Scheduled Tribe Component Monitoring System, Going Online As Leaders (GOAL)- Digital Entrepreneurship, Spring Water Atlas, National Migration Repository, Adigrams.  All these IT initiatives together ensure that the funds allocated for welfare of tribals are effectively utilized.

Last year Ministry had received was SKOCH Gold Award for its “Empowerment of Tribals through IT-enabled Scholarship Schemes” project of Scholarship Division of the Ministry. MoTA is fully committed to the smooth and effective implementation of the Direct Benefits Transfer (DBT) that aims to bring transparency, eliminate misuse of funds and enable enhanced monitoring of the Schemes implemented by the Government of India.