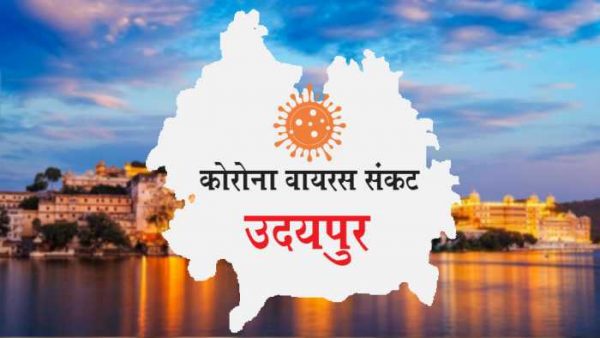 Udaipur : Amid an increase in COVID-19 cases, the Udaipur administration has extended the night curfew timings by one hour in the municipal area. On wednesday, the markets in the urban periphery closed by 8 p.m. instead of 9pm earlier and strict curb on vehicular movement has been laid from 9pm.

Police jeeps and patrolling vehicles made rounds in the entire city area calling out shopkeepers and traders to wind up the business and after 9pm barricades were seen put up at various junctions with policemen stopping the vehicles passing after the permitted hours.

On Wednesday, 410 fresh cases were reported in Udaipur of which 75% cases i.e 308 were from urban area and rest from the district. Since last week, cases have been on rise continuously. While on April 1 total 123 cases were reported, it was 198 on April 5, 367 on April 6.

The administration has indicated to increase strictness in the coming days, if the number of infected people kept on increasing this way. Collector Chetan Ram Deora said despite various awareness campaigns and counsellings people are not yet abiding strictly to the corona protocols and hence the cases are upscaling.

If the public continue to take liberty for granted, the administration would be forced to increase strictness and lay more checks on civil life. Meanwhile, the medical department has increased the number of samples and vaccination. Looking at the upsuring cases, additional 514 beds have been arranged in 4 government hospitals.

At present 514 beds are available at the government hospitals of which 339 are vacant. In private hospitals of the city area, there are 1428 beds available with 864 ordinary ones, 477 with oxygen supply and 128 attached with ventilators.