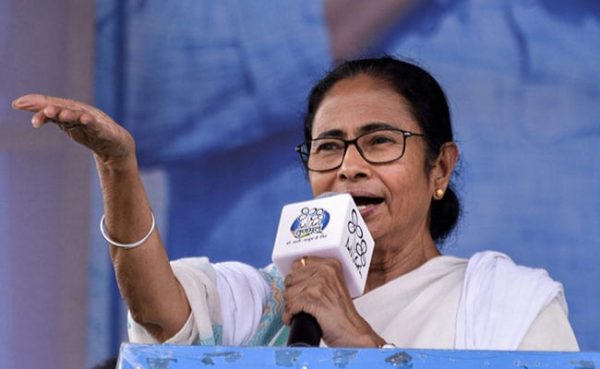 Kolkata : West Bengal Chief Minister Mamata Banerjee has announced a high level probe into last night’s vandalism and violence inside Vidyasagar College in North Kolkata and squarely blamed BJP and its party workers for this and particularly for smashing the statue of great educationist and the key figure in Bengali renaissance Ishwar Chandra Vidyasagar ‘as part of its alleged conspiracy to create trouble in the state’.
Announcing her decision for a high level investigation into the whole incident of violence and vandalism inside the college campus last night, the Chief Minister on her return from a series of election rallies, said in front of the college campus that every culprit would soon be brought to book as the people of Bengal would not accept such vandalism, particularly the destruction of the statue of  the world famous educationist and philosopher. ‘I would soon announce the composition of the inquiry committee’, she said.
City Police Commissioner Rajesh Kumar, who was also present, said over 100 miscreants had so far been arrested in connection with the incident at Vidyasagar College campus and soon all others who were involved in such a condemnable act would be rounded up and proper action would be initiated against them soon.
Please share this news
2019-05-15
chundawat
Share