New Delhi : The BJP on Friday hit back at Congress leader Rahul Gandhi for accusing it and the RSS of “trying to break the composite culture of Jammu and Kashmir”, alleging all vexing issues of the region are the “legacy of the Gandhi family”. 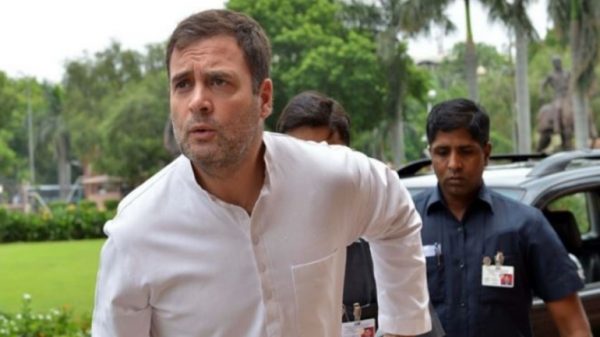 BJP national spokesperson Sambit Patra, in a press conference, alleged the Congress, for its petty vote bank politics, sacrificed not only the Kashmiri Pandits but also the development of the region.

A day after paying obeisance to Mata Vaishno Devi in Katra, Gandhi accused the BJP and the RSS of “ruining” the love and brotherhood that existed among people of the Union Territory.

Reaching out to displaced Kashmiri Pandits, the former Congress chief said he and his family belong to this community and promised them all help.

Gandhi said he himself belongs to the Kashmiri Pandit community and feels their pain.

Training his guns at the Gandhi scion, the BJP spokesperson dubbed him “immature and irresponsible”.

He said, “Problems of Jammu and Kashmir are the legacy of the Gandhi family. It was Jawaharlal Nehru who was responsible for the problems of Kashmir.”

Astonishingly, Rahul Gandhi “very conveniently forgot that the woes of the Kashmiri Pandits were because of the politics of appeasement of the Congress and like-minded parties”, Patra said.

Hailing the Narendra Modi government and Union Home Minister Amit Shah for the abrogation of Artice 370, he said it ended all discriminations against women, Schedules Castes and “refugees” from Kashmir.

“Under the leadership of Prime Minister Modi, Kashmir is now moving in the direction of development and inclusiveness,” Patra said.

Raina in a statement said, “Rahul Gandhi and his family are not genuinely interested in Hindu religious activities but are frightened by good works of Prime Minister Narendra Modi.”

“The Congress has committed enough sins and now it is good that they want to seek mercy from the divine mother. But even now, the Congress blatantly displayed its flags on the Mata Vaishno Devi track which proves that the party is only indulging in false propaganda in the name of religion,” Raina said.