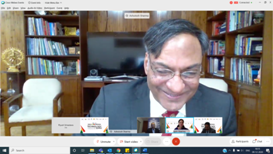 The DST-CII India-Portugal Tech Summit has identified several opportunities for engagement amongst stakeholders at various levels while deliberations on the possibilities of scaling up solutions to address societal challenges facing the world have yielded positive results, dignitaries said at the valedictory session of the DST-CII tech summit.

“As we look forward to several new Public-Private Partnerships taking shape between India and Portugal, we will also create opportunities for fast-track market entry for new stakeholders. I am sure that the in-depth thematic sessions during the summit must have provided delegates, from both sides, insights into the opportunities in a vast range of subjects,” Secretary Department of Science and Technology Prof Ashutosh Sharma pointed out at the closing session of the summit organized during 7th-9th December 2020 over a digital platform.

Professor Sharma added that the three-day summit witnessed a series of engaging and productive deliberations on matters that concern the socio-economic development, not only of India and Portugal but also of the world.

“We look forward to strengthening this very special partnership, based on the deliberations during this summit, which provided an effective platform for industry, academic institutions, researchers, and government agencies from both the countries,” Prof Sharma stressed.

Mr. Carlos Pereira Marques,Ambassador of Portugal to India, underlined that in the last 3 days, there have been closer interactions from both sides and believed this collaboration is the need of current era, wherein India is centre of world attention. He stressed that Indo-Portuguese collaboration will be stronger and deeper. Mrs. K. Nandini Singla, Ambassador of India to Portugal pointed out that the bilateral cooperation between India and Portugal in the science and technology is the oldest and robust. Portuguese govt. is keen to work jointly in cleantech, healthcare, space etc. Since India is bringing in a new Geo-space policy, Portuguese Govt. is keen to collaborate in satellite areas. Intersection between space, earth and water is important for both the nations for generation of commercially viable sustainable solutions for the developing countries including waste and water management.

The yearly summit has been instrumental in providing significant opportunities to forge and foster global technology partnerships. The heads of the partnering countries addressing the summits testifies the importance that is given to S&T globally.

The three days summit was attended by 2,200 delegates (200 from Portugal, 2000 from India & 64 from other countries) and had 85 speakers. Around 49 Indian industries and 11 Portugal industries showcased their technology in areas like water, health, energy, cleantech, and so on at the digital exhibition. Besides, 200 B2B meetings were held to share experiences.