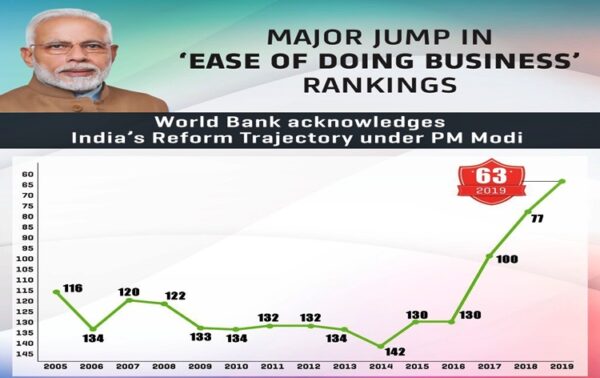 India has jumped 14 places to take the 63rd position on the World Bank’s ease of doing business ranking. The country was 77th among 190 countries in the previous ranking. In its Doing Business 2020 report, the World Bank commended the reform efforts undertaken by the country.

India has improved its rank in 7 out of 10 indicators and has moved closer to international best practices. Significant improvements have been registered in resolving insolvency, Dealing with Construction Permits, Registering Property, Trading across Boards and Paying Taxes indicators. India has improved its rank by 79 positions in last five years.

Briefing reporters in New Delhi, Finance Minister Nirmala Sitharaman said, all efforts will be made towards achieving 50th rank in ease of doing business from 63. She said, world bank has recognized India as one of the top 10 performers on the list for the third time in a row.