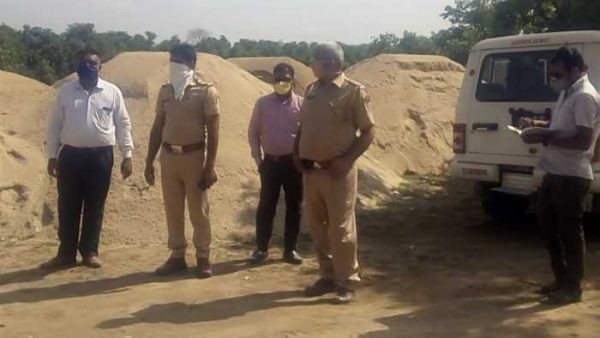 Udaipur : Chittorgarh police is cracking the whip against illegal sand mining. In a largest seizure of recent times, police officials conducted raids at several places in a week and have seized 5990 tonnes of sand which was being illegally transported. Many vehicles including tractors, trolly and dumpers have been consfiscated while 8 persons have been arrested so far.

” A special team under the supervision of ASP Sarita Singh held a massive drive to curb illegal sand mining in the district. Eleven sites where illegal sand stock had been kept, were raided and we confiscated 3 trailors and dumpers each and 2 tractor-trollies. While 8 people have been arrested, 14 more have been booked and their involvement in the crime is being investigated” Chittorgarh SP Deepak Bhargava told Udaipur Kiran.

The officer said the drive began on July 17 with a joint raids from Gangrar, Chanderiya and Sadar police station teams that arrested 4 persons. Three days later Bassi police aided the special team to nab 3 persons with a large sand stock. On July 21, Gangrar and Parsoli teams raided Kanwarpura , Chomu Ghata and Gangrar settlemets from where 3650 tonnes of sand was seized. At Bada Kheda village 690 tonnes of sand was found and two persons were booked on July 22. Similarly a large stock of 1650 tonnes was confiscated from Soniyana and Jojaro ka Kheda villages on July 23 and three persons were booked.