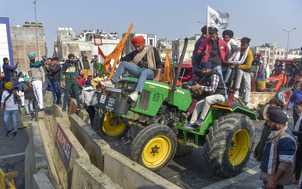 Groups of protesting farmers camping at Singhu, Tikri and Ghazipur border points of the national capital broke police barricades on Tuesday morning to force their way into the city, much ahead of the time they were granted permission by Delhi Police for their tractor parade.

Tractors bearing flags could be seen, along with men and women dancing on dhols, and locals on both sides of the road showering petals on cavalcades, as security personnel tried to convince farmers to stick to the decided plan of holding the tractor parade after the conclusion of the Republic Day parade at the Rajpath.

Locals were also seen distributing food and water bottles to the protesting farmers who were part of the march.

A senior police officer who was at the spot said that a group of farmers entered the national capital after breaking the barricades.

“As per agreement, they were supposed to start their parade at the time specified but they forcefully entered Delhi and are currently peacefully sitting at Mukarba Chowk. They are supposed to head towards Bawana side as per the route but they are adamant that they want to go towards Outer Ring Road.

“The situation is peaceful and we are trying to convince them to go towards the designated route at the specified time, he said.