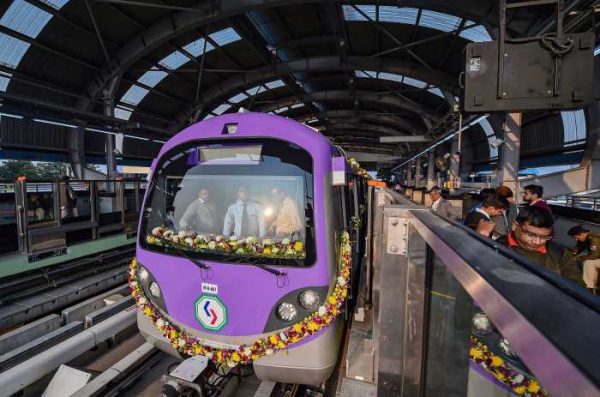 Government has approved the Ministry of Railways’ proposal for revised cost estimate for construction of Construction of Kolkata East West Metro Corridor Project at an estimated cost of  Rs. 8574.98  crore. The project envisages construction of a Metro Corridor between Salt Lake Sector-V to Howrah Maidan in West Bengal for a total route length of 16.6 kms. The project is being implemented by Kolkata Metro Rail Corporation Limited [KMRCL] which is a CPSE under Ministry of Railways, set up as a special purpose vehicle. The pre-pandemic target for completion of their project was December,2021. Efforts are being taken to minimise the impact of pandemic on completion of the project. The project includes immense technological challenges like tunnel below river Ganges which is the 1st transportation tunnel in India under any major river as well as Howrah Station which is one of the deepest Metro stations in India.

The mega project envisions creation of an efficient transit connectivity between business district of Kolkata with industrial city of Howrah in west and Salt Lake City in east through a safe, accessible and comfortable mode of public transport. Since this corridor connects three most important parts of the Kolkata Metropolitan Area i.e. Howrah, Business area of Kolkata and New Settlements in Salt Lake it is going to revolutionize the mass rapid transport in Kolkata and adjoining Howrah and Bidhanangar. This will connect important landmarks like Howrah, Sealdah, Esplanade and Salt Lake Sector-V which is an IT hub.

It will integrate multiple modes of transport like the Metro, Sub-urban Railways, ferry and bus transport by constructing interchange hubs. This will ensure smooth and seamless mode of transport to lakhs of daily commuters.

•           Benefit to people by providing a safe, efficient and environment friendly transport system.

An inhalable formulation could provide better treatment for TB