From a hotspot, Nimbahera has emerged winner after battling COVID for 24 days 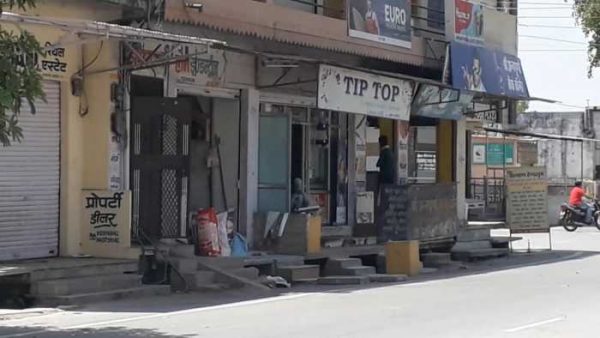 ‘Only town to have 8% population sample tested’

Udaipur : No other corona positive patients in Rajasthan perhaps had received what the infected ones in the cement town Nimbahera did after recovery – a heart touching letter from the District Magistrate himself. As the officer wished each one of them good health with a rose, he gave them a brotherly advice to maintain social distance , follow the SUMAN-K handwash technique and to share personal experience to others so as to motivate them not to take life and liberty for granted.

As Chetan Deora, Collector Chittorgarh declared the town that was grappled by the pandemic, corona free on Saturday, people rejoiced and sighed relief. The small town of around 70 thousand population had lived under great fears as the whole area was under curfew and containment zone simultaneously after the first positive case was reported on April 26. ” It was a blind case since the trader had been meeting everyone for almost 10 ten days after being infected of the virus and within few hours after his case was tested positive, he had to be put on ventilator. His house was in a congested lane and we knew the virus had by then infected many” Deora told Udaipur Kiran.

The administration and police department worked jointly on the ‘dug out theory’ to find and scan close contacts of the trader and as they feared, almost 90 percent of the cases turned out from the single source. One by one 162 people were found positive till May 19. Rigorous sampling was adopted as 5542 samples were tested which constitutes almost 8 percent of the town’s population. ” We did not hesitate in taking samples despite knowing that more test would mean more turnout of positive patients. We could not play with lives” he said. Initially the patients were sent to Udaipur govt hospital but when the latter refused to take in more cases due to over load, the Chittorgarh administration had no other way than to find a place to keep them.

“In Nimbahera we created two Covid Care Centres (CCC) for positive tested patients who were not sent to the district hospitals like elsewhere. It was beneficiary since the viral load was minimum in CCC which helped in speedy recovery. Secondly, the sub district hospital was not used for COVID purpose and hence it was available for non covid ailments and other medical activities. With better management and care in the CCCs, patients stayed there in relaxed regime and we didnt have any food or facilities complaints like patients in other districts had to face” the DM said. Every quarantined person in the town was given a special kit consisting of a 20 ltrs water camphor, glass, sanitiser, mask, towel, bucket-mug, soap, tooth paste-brush, hair oil, and dustbin.

Step Down Centers (SDC) was another innovative step that was only implemented in Nimbahera in Rajasthan. ” We introduced the concept of SDCs where the covid patients discharged from CCC, after two consecutive negative test reports were kept. Medically recovered persons were kept in these SDCs for 7 days . The purpose was to relax them in a stress free atmosphere, engage them in creative activities and also ensure proper quarantine. We used resorts for SDCs to give them better environment” Deora said. Since May 19, no new positive cases have been reported while two consecutive reports have been tested negative for all the infected patients. While of the 162 positives, 2 died whereas 160 are completely recovered.