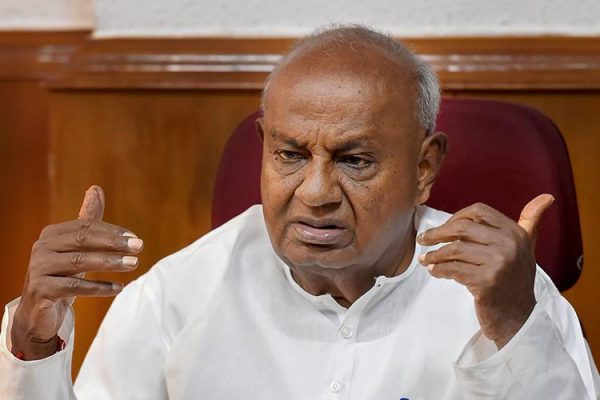 Bengaluru,23 May(Udaipur Kiran): HD Devegowda, former prime minister and Janata Dal Supremo has lost in Tumakuru constituency by a margin of 15,433 votes. He was defeated by GS Basavaraj of the Bharatiya Janata Party.
HD Devegowda had represented Hassan constituency five times but preferred to handover the family bastion to Prajwal Revanna, grandson and son of HD Revanna, district in charge minister in the coalition government.
In fact Tumakuru was represented by SP Muddahanumegowda of the Congress in the previous Parliament but the senior Gowda insisted that the Congress part away the constituency so that he could contest from there.
SP Muddahanumegowda although initially consented if HD Devegowda were to contest from there but in a couple of days raised a banner of revolt by announcing his candidature from the same constituency.
Not only he but even KN Rajanna, former Madhugiri Congress MLA also filed nomination papers as Congress candidates. Later they were persuaded to withdraw but by then the damage was done and the same has now been reflected in the results.
Please share this news
2019-05-24
chundawat