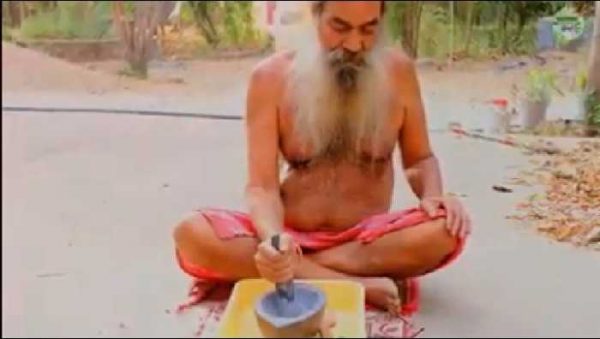 Udaipur : A police complaint has been lodged against Baba Bhagwandas of BabaGhat Ashram under Chanderiya police station limits in Chittorgarh district for allegedly tricking people with the promise of ayurvedic medicines for treating cancer. Bhagwandas examined and treated patients without any valid degree in Ayurveda and charged huge amount for medicines made at his ashram.

One Jagdish Sharma of Gandhinagar colony lodged the complaint claiming that his son Rahul’s condition deteriorated after taking Baba’s treatment. Sharma told the police that Rahul injured his tongue while chewing food some 9 months ago and he was taken to a hospital in Gujarat for treatment where the doctor advised for a surgery costing around 2.5 lakh rupees.

The family returned to Chittorgarh to arrange expenses for the treatment and happened to visit Baba’s ashram when someone advised them that the old man treated serious ailments. Sharma said they visited the ashram sixteen times and paid six to eight thousand rupees in every visit for medicines, honey and ghee that were given from the ashram. Despite spending huge amount when Rahul’s condition did not imporve, the family realised that they had been tricked. Suresh Giri, the investigation officer said that practising medicine without a valid degree is a punishable offense and Baba Bhagwandas does not have any degree.

Dr Indushekhar, district ayurveda officer also said that sale of ayurvedic medicines without eligibility is a serious offense. The baba have been operating with the help of a racket and advertising on social media platforms on treating cancer effectively. An enquiry would be called in by the department too, he said.